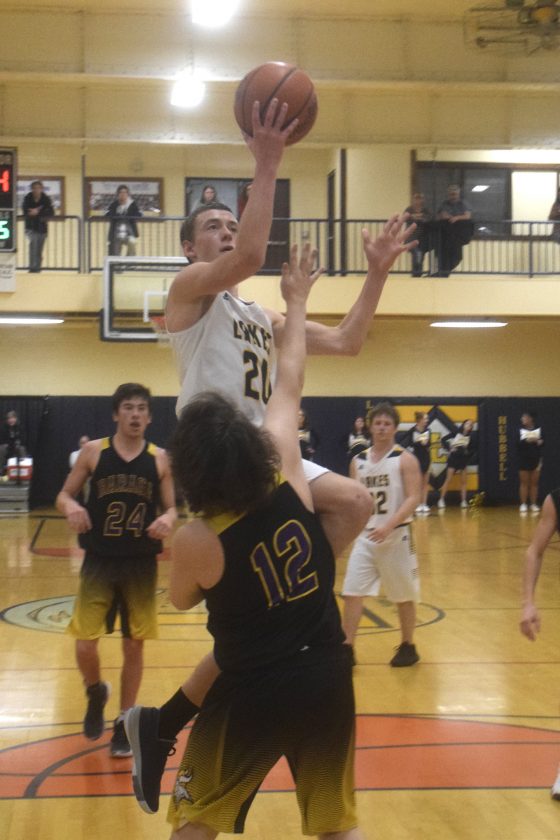 LAKE LINDEN — Despite a shaky start, the Lake Linden-Hubbell boys basketball team was able to settle and play their game which translated into a 77-52 win Thursday night over the Baraga Vikings.

“Overall, we were just flat tonight,” said Baraga’s head coach John Boever. “We did not take of the ball well and that turned into points for Lake Linden.”

A full-court press put on by Lake Linden rattled the Vikings as it led to rushed passes and poor shots as the second quarter got under way. With a Lake’s hand in their face and another reaching for the ball, the Vikings found themselves trapped time and time again.

“We played really good team defense,” said LL-H head coach Jack Kumpula. We were able to generate some offense off our defense. This allowed us to get out on the floor and run and lay ups.”

Lay-ups were the shot of choice for the Lakes as they were able to either drive up the key or pass their way under the basket and off the glass for points. They led 39-18 at half.

Baraga’s best eight minutes was the third quarter as they out scored the Lake 19-16. The Vikings had three players in double figures. Steele Jondreau led the team with 13 points, Presley Rasanen had 10 points and Zach Sackett poured in 11.

Up by nearly 20 points to start the fourth, Kumpula was able to play some of his bench players. This included Zavier Fountaine and Joel LePage. In the waning minutes of the game, LePage was able to nail a three pointer and Fountaine point one in off the glass in the paint.

“It was good to see them get some time as those two work very hard at practice,” said their coach.

Even with the game out of reach , Boever game his team an “A” for effort.

“These guys persevere,” he said. “It is hard to stay up when you are down by 30 or 40 points, but our guys come to play and they stick it out till the end.”

The Lakes had three players of their own in double figures. William Lyons led with 23 points. Caleb Gregorie scored 18 while his brother, Cole, had 14.

Wakefield-Marenisco will travel to Baraga on Monday. Meanwhile, the Lakes head to Ewen-Trout Creek on Tuesday to play the Panthers.

ONTONAGON — Everyone got into the scoring action Thursday night as the Ontonagon Gladiators downed the Jeffers Jets 61-48.

According to Gladiators head coach Brittney Turin-Jilbert, the win was big one as her team lost a close one earlier in the week to Lake Linden.

“Everyone scored and we utilized our inside game more than relying on our outside game,” she said. “Tonight was one of our overall best offensive nights we have had.”

A good old-fashioned film review helped them to strategize as well, Turin-Jilbert said.

“We also watched game tape after our loss to them (Jeffers) from a few weeks ago and were able to make our defensive adjustments and work on our help defense.”