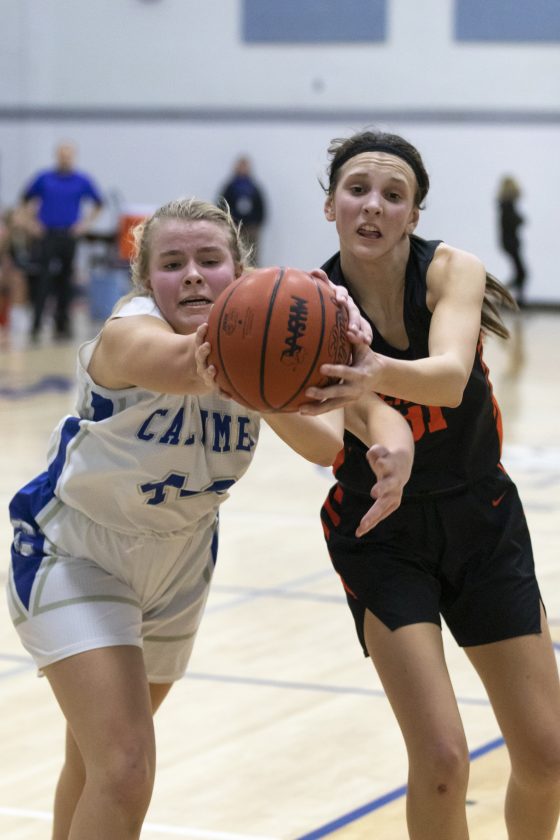 CALUMET — The opening minutes of the Calumet Houghton girls basketball game on Tuesday were not pretty.

Easy shots were missed and the ball was turned over at both ends of the court. It took a long 2:10 for either team to score.

The first shot fell from Marybeth Halonen in the form of a free throw and the Copper Kings were off and running. They never looked back as they cruised too a 70-46 victory in front of a cheering hometown crowd.

“It was rough at first,” said Copper Kings head coach Matt Laho. “But once we settled in and started making their shots that became the difference in the game.”

The game was tied at four and at six before the buzzer sounded to end the first with Calumet on top 8-6.

A tight full-court press by Calumet (6-3) in the second gave the Gremlins (3-7) fits causing them to frequently turn the ball over via a poor pass or a stolen ball. As well the Copper Kings went on a 13-1 run in the middle of the second quarter to move the score to 23-9 in their favor

“Our defense did a good job of mixing it up,” Laho said. “It was good because it kept the other team off balance.”

Calumet led 29-19 at the midway point. It was not completely outreach for the Gremlins according to their head coach Julie Filpus. However, team need to act quickly if they wanted to make up ground in this game.

“We needed to come out and get some stops and scores and we did not,” she said.

“We were able to keep the deficit between seven and 11 points but a turnover here and there and the game got out of hand.”

In the third the Copper Kings quickly moved the lead to 13 as they simply outplayed the Gremlins.

“Calumet’s skill set is more advanced in terms of the way they handle the ball and just their court sense,” said Filpus. “They were bigger in size and strength as well.”

The fourth quarter was much the same as the Copper Kings outscored the Gremlins 20 -15.

“Night in and night out Ellie carries this team,” Laho said. “She does a good job of getting to the rim even when she knows she has a target on her back.”

Laho was also pleased with two of his bench players.

“Kenlie Anderson (junior) and Laura Giachino (sophomore) both stepped up and gave ups some good minutes.”

Giachino had eight points while Anderson had two rebounds and four steals.

The Copper Kings will host Gwinn on Friday, while the Gremlins visit West Iron County.

BARAGA — Baraga eluded Ontonagon with a 52-39 win on Tuesday.

The Vikings got 20 points from Rylie Koskinen. Jaylon Lindemann added 14 points and Reide Osterman had 10.