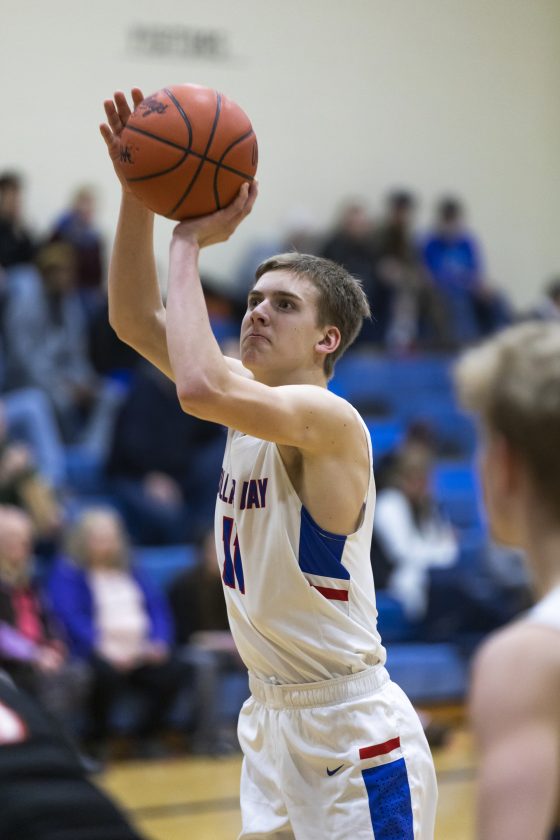 LAKE LINDEN – The 2020 Copper Mountain All-Conference Boys Basketball Team was announced on Friday. It included players from both the Copper Country and Porcupine Mountain divisions.

Earning the Most Valuable Player Award was Ashton Janke, of Dollar Bay. The 6-foot-5 Janke led the Blue Bolts to a 19-2 record and to a Division 4 district semifinal win earlier this week. It was during that game that Janke poured in 20 points, had 14 rebounds and reached his 1,000th career point as a Blue Bolt. He averaged about 24 points per game.

“Ashton was the quintessential teammate,” said his coach at Dollar Bay Jesse Kentala. “He was chasing 1,000 points all year but he always found the pass to the open guy. He was never a ball hog. He is a great kid and a great teammate.”

Kentala added that Janke is well deserving of the honor as he has put a lot of time into his game both during the season and in the off season to become a girted scorer.

“He played AAU and got into a weight-lifting program over the summer,” Kentala said. “He really cares about basketball and it is great to see a kids hard work be rewarded.”

Morgan Miscovich of Wakefield-Marenisco, was named the Defensive Player of the Year. Kentala and Brittany Turin-Jilbert, of Ontonagon, were honored as co-Coaches of the Year.

Turin-Jilbert made her debut as a varsity boy’s basketball coach and led the Gladiators to a 10-11 record.

Is it already too late for us?

A larger discussion on value of good sources