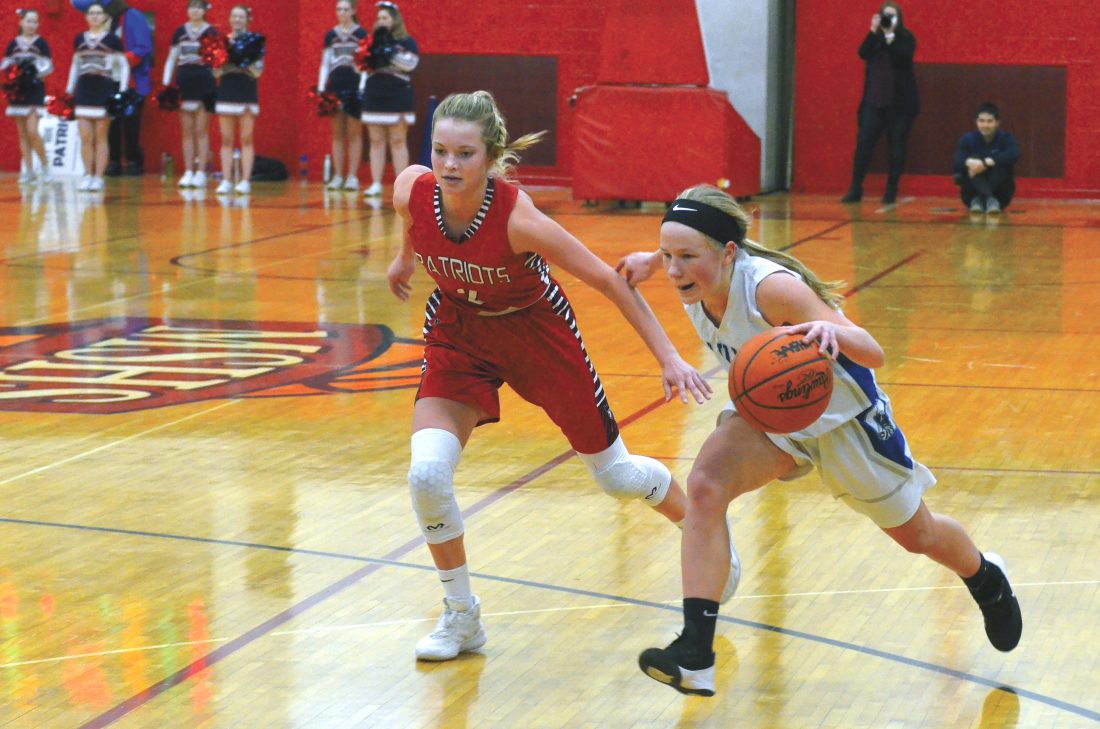 MARQUETTE — Emily Nelson was poised to earn a spot in Westwood’s starting five.

Head coach Kurt Corcoran gave the junior that opportunity Tuesday night, and she delivered in a big way.

Westwood (22-2) advances to Thursday’s regional championship game in Sault Ste. Marie against Charlevoix (19-5) in a rematch from last season.

Charlevoix thumped Oscoda 65-29 in the other half of the bracket. The Patriots beat the Rayders in last season’s regional final, 47-29.

Nelson scored eight of Westwood’s 13 third quarter points to help her team pull out to a 37-23 lead going into the final frame. She replaced fellow junior Ellie Miller in the starting five due to the fact that Calumet brought a different look to the table.

“I think that’s probably what makes us so dangerous,” Corcoran said. “I think that’s the sign of a quality team, when you don’t really know who’s going to step up for you. Emily Nelson has just been itching for a starting spot for probably a month and a half now. Ellie Miller is our best rebounder and best post defender, but Calumet is really little and scrappy, so we made the switch and put Emily in there to guard (Calumet sophomore) Jana Loukus, and she did an incredible job defensively. She had 10 points (tonight) on 4 of 5 shooting, she rebounded and she played unselfish basketball.”

Corcoran didn’t forget to credit the rest of his team either. Scoring was distributed around eight of Westwood’s 12 players on the roster, led by sophomore Natalie Prophet with 12. The Patriots shot over 56 percent from the field, sinking 18 of 32 shots.

“Everybody scored and these were all quality buckets too,” he said. “I think our girls are really playing the best basketball of the year at this point, which is obviously what you want in the tournament.

“All the girls, everybody did their role. Calumet likes to dribble drive. They like to penetrate the lane and make plays that way. Often times, they’ll penetrate through three girls, pick up a lot of fouls and shoot a lot of free throws off of that. Our girls did an excellent job of closing the doors, taking away the gaps and making them feel really uncomfortable on offense.”

The Copper Kings capped an extremely successful season at 19-4 and will lose just one senior to graduation.

“To have the season we had with the core of our team being sophomores and juniors, they did an incredible job this year just having the success they had,” Calumet head coach Matt Laho said. “They’ve got a bright future.”

That one senior is Ellen Sturos, who played a big role in key situations this season after being convinced to join the team.

“She wasn’t even going to play this year,” Laho said. “I convinced her to play and she was a big part of a lot of games for us. (Today) she had some good rebounds, she’s a great three point shooter and when she gets a chance to shoot, she usually knocks it down for us. I’m just happy she came out and did as well as she did this year.”

Westwood held a narrow 14-10 lead after one quarter before opening the second on a 9-2 run. That started off as a 7-0 streak thanks to buckets from senior Tessa Leece, Prophet and a triple from senior Madi Koski. That put the Patriots up 21-10 before Sturos ended the run with a putback.

A triple from Calumet junior Elli Djerf pulled the Copper Kings within 24-17. After that, scoring stalled out on both sides for the remainder of the half. The score remained the same for the final four minutes, with Westwood taking a seven point lead into the break.

Calumet was unable to recover from Nelson’s eight point third, which was also aided by five more points from Leece.

The Patriots managed to hold the Copper Kings to just three points in the fourth to pull away for good.

Leece added nine points for the Patriots while senior Karlie Patron chipped in eight, also picking up nine of her team’s 26 rebounds.

Calumet was led by Djerf and sophomore Marybeth Halonen with eight points apiece. The Copper Kings picked up 28 rebounds with Halonen and sophomore Lizzie Torola each getting seven.

Tipoff between Westwood and Charlevoix in the Division 3 regional final is slated for 7 p.m. Thursday in Sault Ste. Marie.