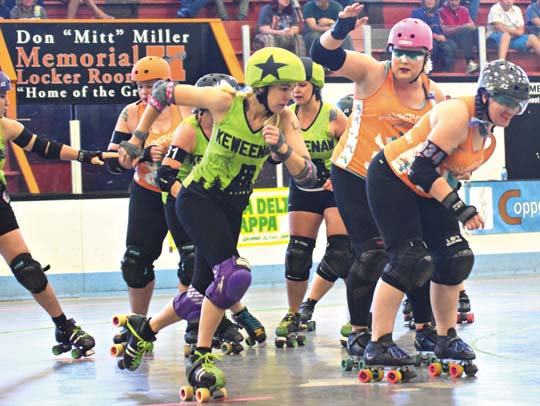 Eddie O’Neill/Daily Mining Gazette The Roller Girls’ jammer drives past the Krush during a match Saturday at Dee Stadium.

HOUGHTON — It begins with a pair of those old-school roller skates. Add a set of knee pads, a mouth guard, helmet and a snarky name on the back of a jersey, and it all equates to roller derby.

While to the average on-looker, it may it look like a major traffic jam on four wheels, don’t tell that to the ladies of the Kingsford Krush or the Keweenaw Roller Girls, whose athletic ability and camaraderie was on display Saturday night at Dee Stadium.

According to the Women’s Flat Track Derby Association (WFTDA), roller derby is the fastest-growing women’s sport in the world.

In the Upper Peninsula, there are teams from Houghton to Escanaba, with numerous small-town clubs in between. Typically, teams compete once a month. The bout on Saturday was Keweenaw’s last one of the season.

Kelly Steelman, who serves as president of the Keweenaw club, is familiar with the scene not only locally, but around the globe.

“Years ago, I was in a league in Australia,” she said. “It is highly competitive there. You would have 2,000 people at a bout.”

While that number of fans in those days was a lot larger than what was at the Dee on Saturday, the team-spirit level on the derby-oval was up there.

“It is hugely empowering to women,” said Karisa Roell, known as Bernice Python on the rink. “There is a unique bond among us. When you join, you instantly have 25 sisters.”

The 38-year-old veterinarian was one of the driving forces behind the creation of the Krush.

“I had inline-skated for many years, but I needed something different. A roller rink opened in 2011 and I started the Krush soon after. It was a lot of fun.”

Cecilia Brown tells a similar story. She joined the Krush in 2012 as a non-skating member who helped out with meets and the organization as needed. In 2017, she finally put on her skates and made her debut this spring as Snitches n’ Stitches. It is an appropriate name as she is a “real-life” seamstress.

“Last February, the girls taught me how to skate,” she said. “It was such a positive atmosphere. I needed friends and something to get me out of the house. This was it.”

A fair amount of athletic ability is involved in this sport as well.

The Keweenaw Roller Girls practice two to three times a week at Dee. While a number of the women confessed that before joining, their last time on skates was in eighth grade at the local roller rink, it wasn’t a deterrent. Steelman said the league accepts those who are willing to work hard and have fun regardless of shape, size, orientation, and level of athleticism.

Roller Derby bouts consist of two 30-minute periods. Each period is divided into two-minute jams where each team attempts to score points. Points are scored when a designated skater, the jammer, makes it through the pack of her team of skaters and then the other team’s skaters. Skaters can use their hips, shoulders and torso to block an opponent, but they cannot block or push an opponent from behind. They can, however, push, pull and whip their teammates to their advantage.

In short, a jam looks like a crowded, tangled traffic jam with people vying for position and one of them eventually breaking free and sprinting around the rink.

Kim McMullan aka “Kim Kong” said that a big portion of their (Keweenaw Roller Girls) success comes from their teamwork as seen on Saturday.

“We know each other really well, and we are all good sports,” she said.

That teamwork goes beyond the rink.

A number of the Roller Girls spent long hours this past summer helping with flood relief and recovery.

“We are all community members and went to a number of volunteer days. After the flood, we came together,” said Jenn Sams, who serves as the Keweenaw Roller Girls’ public relations.

She added that the team is always looking for new recruits and you do not have to be an expert skater to join. The team accepts all women who are willing to work hard and have fun regardless of shape, size and level of athleticism.

“Come check us out,” she said.