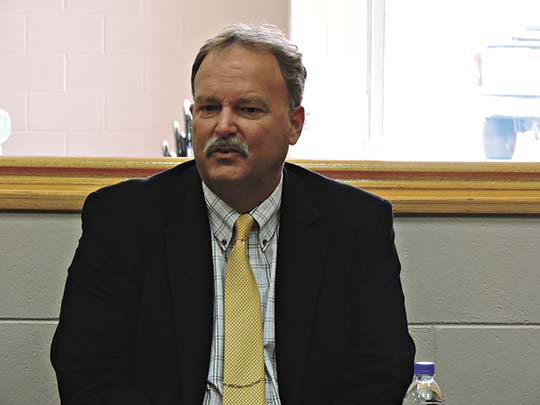 Graham Jaehnig/Daily Mining Gazette Steve Patchin, shown here, was one of three candidates subjected to an hour-long interview as part of the Hancock School Board’s search for a superintendent to replace Kipp Beaudoin.

HANCOCK — As scheduled, the Board of Education conducted interviews in a public forum Tuesday evening, at which they asked the same questions to three candidates, Steve Patchin, director of career services at Michigan Technological University, Chris Salani, athletic director at Hancock Public Schools, and Katrina Carlson, supervisor of special education with the Copper Country Intermediate School District.

Each was asked what experiences and qualifications made the candidate qualified to be the next superintendent of the Hancock Public Schools.

Patchin said after receiving a BS in Social Sciences, and a BS in Business Administration, he became a teacher at Dollar Bay Schools, where he remained for five years. He said in his fifth year there, he was awarded Teacher of the Year by the CCISD. In those five years, he said, the majority of the students were unsure of what they wanted to do after graduation, and the solution to that problem was summer youth programs.

Taking over a program with budget deficits in the hundreds of thousands of dollars, he said it was an excellent program, but had a declining enrollment. He had to develop a marketing plan, so he talked with teachers, discussed the problems, and developed Mind Trekkers, between the teachers, the academic departments, that was a science-based program that allowed kids to explore science.

Changing the name to the Engineering Scholars’ Program, it now operates in the black, he said. It also attracted students as enrollment went from 60 to its maximum of 150 students per year.

Salani answered the same question by saying that his experience began many years earlier with being a student in Hancock, with being a Bulldog. Those lessons, he said, carried on in his development, whether at the college level, or at the graduate level, and once he moved on to a professional career.

“I think in my tenure, and the places I’ve been, I’ve been able to demonstrate the ability to execute, to vision, to plan, and ultimately build the relationships that are necessary to help move forward as a team, if I can use that verbage,” said Salani. “And that’s what is important: Identifying what we all need to be able to move forward, set the course, work together, and execute.”

Carlson, when asked the same question, responded by saying she would like to start with her background in student teaching.

She said she student taught under Deb Barna at Barkell Elementary School in 1993, she also student taught with one of the teachers whom she now supervises, before teaching at Republic-Michigamme for 10 years, in general education.

She earned a special education and an elementary degree, she said, but there were no special education positions in that district. She taught preschool and kindergarten, because those positions were open, but when the district made a number of changes, she and her husband decided to return to the Copper Country, where she was hired by the CCISD, and worked in early childhood, general education high school for the current technical (education program), and also did some distance learning with a neighboring ISD but, due to financial limits, that program was discontinued.

Still with the CCISD, she then started working with outreach, doing behavior and behavior plans, and also early-on, so she was doing home visits.

She has been back in the Copper Country for 16 years, she said, working in Hancock Schools, working in her current position as supervisor of Special Ed. She is in Barkell and the high school/ middle school building frequently, she said.

“I’m there a lot (Barkell), working with the teachers, and working with our teachers, too,” she said, “but also collaborating with administrators. Hancock is near and dear to me, I care about the district, I feel that all of those things that I’ve done along the way have led me to able to be here and make a positive change.”