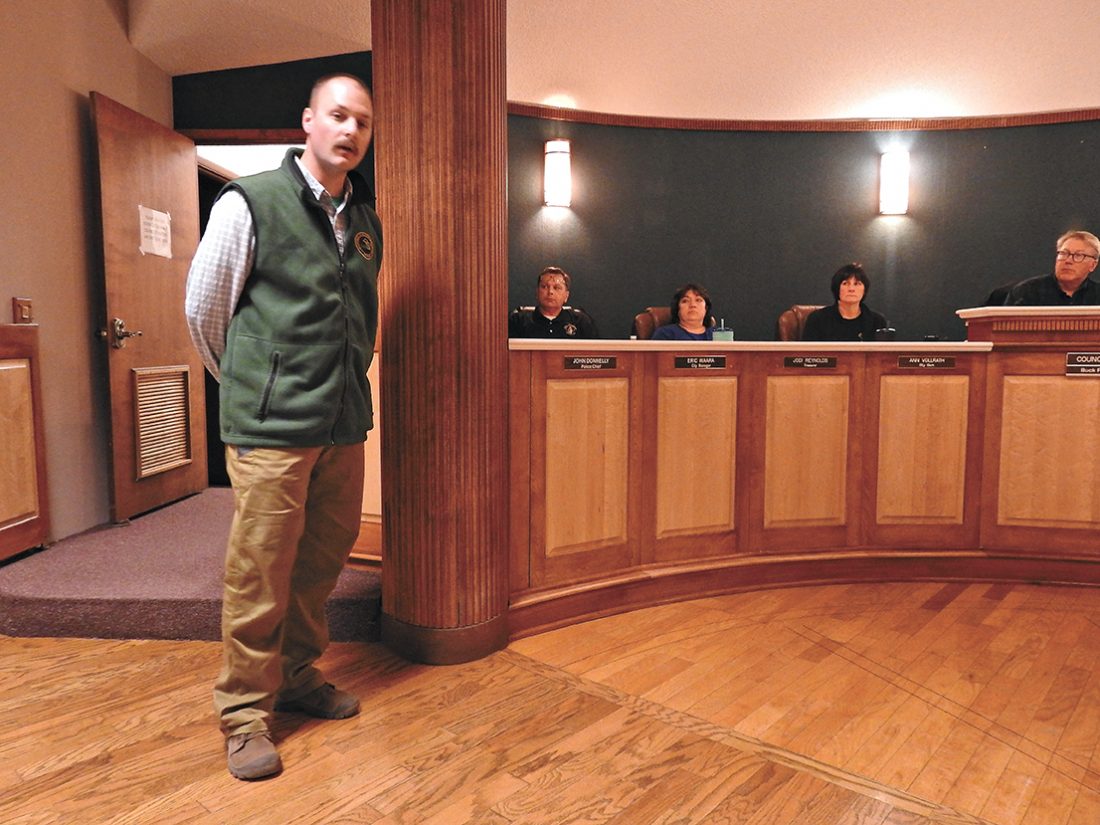 Garrett Neese/AP Photo Matt Torreano, outreach specialist with the Department of Natural Resources, talks about trail repairs in the Houghton area during a talk to the Houghton City Council Wednesday.

The goal is to restore trails to the condition they were in prior to last June’s floods, said Ron Yesney, DNR Upper Peninsula trails coordinator.

Much of the DNR’s work has been on the Houghton-to-Chassell trail, as well as the Lake Linden area, which saw the heaviest washouts.

The DNR manages nine sites in Houghton, all along the Bill Nicholls trail. Snowmobile access was restored on the trail, which connects the two sides of the Portage Lake Lift Bridge. All culvert work along Canal Road have been completed, said Matt Torreano, outreach specialist with the DNR.

Along with health and safety concerns at large erosion sites, one of the DNR’s primary concerns’ was restoring trail access, Torreano said.

“We’re very sensitive to the economic issues around trails,” he said. “Trails drive economies, and especially locally in the U.P. We were very concerned snowmobile trails wouldn’t be open.”

Plans this year are for a hydraulic and hydrology study, a requirement for having repairs reimbursed by the Federal Emergency Management Agency, Torreano said.

The DNR will also conduct gravel capping and grading along the Bill Nicholls trail.

Another nearby site is the Pilgrim River Bridge in Portage Township, which remains closed. A Michigan Department of Transportation rail bridge engineer inspected it in February and found it was unsafe. Because the bridge is still technically a rail grade, it is held to the standard of being able to carry rail traffic, Torreano said.

“Trains may or may never come back, I don’t know, but the legislation that was put in place in 1976 was to preserve those corridors, which if you look at it that way, does benefit community members and it benefits the recreating public as well,” Yesney said.

The DNR has also been monitoring spring runoff, both through aerial surveys and by enlisting members of the public to contact the DNR if they spot irregularities. The danger period for runoff appears to have ended, Torreano said.