Houghton eyes stricter limits on when bridge can be raised 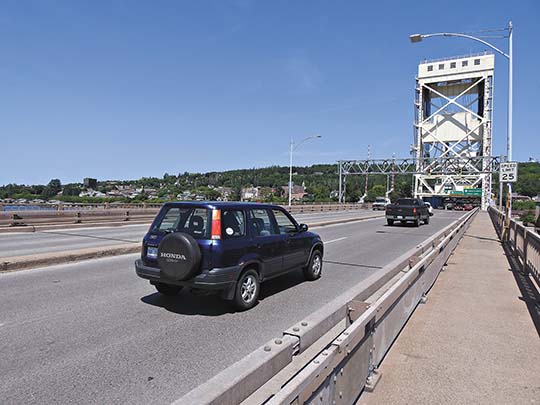 HOUGHTON — The Michigan Department of Transportation is counting crossings at the Portage Lake Lift Bridge.

The information will be used to identify the peak travel times in hopes of tightening the restrictions on crossings for boat traffic that requires the bridge to be raised.

MDOT will use two weeks of bridge data.

“The way the traffic’s been in town, I think it’ll play into our favor,” Houghton Police Chief John Donnelly said at Wednesday’s City Council meeting. “It’ll give us some good data to use.”

“We’re going to take that and try to get some restrictions on when that bridge goes up and down.”

The information will also be passed along to the U.S. Army Corps of Engineers and the U.S. Coast Guard, which has authority over the bridge restrictions.

The bridge protocols, in place since its construction, have become outdated, Waara said.

“Those rules were made when there was commercial traffic going in and out of this port daily,” he said. “The complexion of marine traffic has completely changed here since 1958.”

Title 33, Part 117 of the Code of Federal Regulations requires bridges to open “promptly and fully” when a boat requests passage.

Guidelines for the Keweenaw Waterway state the lift bridge will open on signal most of the day. From April 15 to Dec. 14, the bridge is placed in the intermediate position between midnight and 4 a.m., and requires two hours notice to open. From Dec. 15 through April 14, the bridge requires 12 hours advance notice.

When a boat passes through at 4 p.m. — as happened Wednesday, traffic can take several hours to return to normal, Donnelly said.

Waara said the city will also press the point that the bridge backups ensnare numerous cars headed to other places in town.

“We have a game plan going forward, and MDOT’s being really helpful,” he said.

Donnelly would like to see restrictions such as allowing recreational vessels to cross under the bridge during non-peak windows such as 10 to 11 a.m., 2 to 3 p.m. and after 6 p.m.

“Until we see that traffic data, it’s hard to make those decisions,” he said.