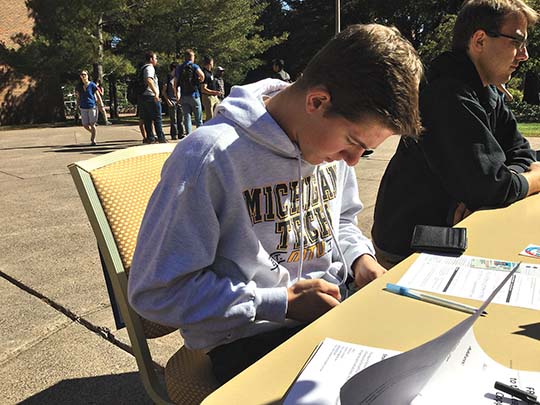 HOUGHTON — With the first presidential primaries only months away, Copper Country residents made sure they were eligible to vote Tuesday as part of the eighth annual National Voter Registration Day.

Voter registration tables were set up at four places at Michigan Technological University and outside the Portage Lake District Library, in the third year for local National Voter Registration Day efforts.

Near the husky statue on Michigan Tech’s campus, League of Women Voters of the Copper Country member Richelle Winkler, an associate professor of sociology and demography at Tech, helped new voters sign up. About 30 people had registered in at that location in the first two hours, she said.

“I think especially for college students, a lot of them are voting for the first time in the next election, so they may not be registered yet,” she said. “I think it’s important for everybody to have the opportunity to vote and be represented.”

Nicholas Brown, a first-year mechanical engineering student, was one of the students who registered.

“They asked me if I wanted to, and I said ‘Yeah’ … just to be able to cast your vote, make a difference,” he said.

The booth also provided other voter information, such as how to get absentee ballots. This year saw the introduction of no-reason absentee ballots in Michigan after a voter-approved initiative last year.

Also Tuesday, Secretary of State Jocelyn Benson announced the launch of automatic voter registration for people who obtain or update driver’s licenses or state ID cards. Online voter registration will also be available after the 2019 elections.

At the Memorial Union booth at Tech, they had gotten many people who had not realized they could fill out absentee ballots, said Angie Carter, an assistant professor in social sciences at Tech.

“People might want to stay registered back home — that’s where their family is, they know about the local issues — so being able to request an absentee ballot is pretty big,” she said.

The booths at Michigan Tech are part of an effort to increase voter participation among Tech students, which has lagged behind that of similar campuses, Carter said.

For the first time, the Portage Lake District library marked the day with a voter registration booth. About 15 people had signed up by about 2 p.m., said librarian Dylan Geshel.