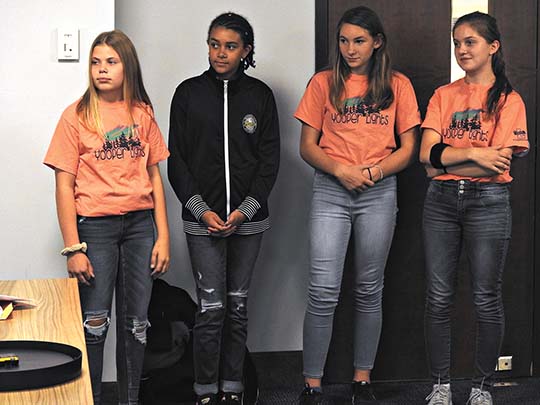 LAKE LINDEN — Lake Linden’s eCYBERMISSION team reported back to the district board Monday about its recent trip to Nationals.

“We didn’t win, but we had fun at the competition,” said Olivia Shank, who competed alongside Rebecca Lyons, Chloe Daniels and Jenna Beaudoin.

The competition, sponsored by the U.S. Army, is intended to show sixth- through ninth-students real-life applications for STEM principles. Out of about 6,000 teams, only 20 make it to the national competition, held in June in Washington D.C.

To aid students walking to or from school in the dark, the team, named Yooper Lights, designed LED reflectors for students to attach to their backpacks.

While at Nationals, the group also did several other science-related activities, such as designing an air filter and exploring ballistics with water balloons.

They also met U.S. Rep. Jack Bergman, who gave the team a tour of the White House and the Capitol building.

“We talked to him about our projects and he said that he really liked it because he likes to go jogging at night,” Daniels said.

This year, the Yooper Lights are working with Tech’s chapter of Society of Women Engineers, (SWE), which got a grant to make electrical engineering kits for fifth- and sixth-graders.

“Michigan Tech is really excited about it too, because they will use it for their alumni,” said coach Gretchen Hein.