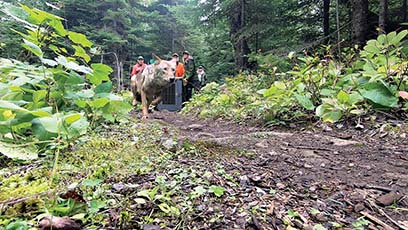 Photo provided by National Park Service/Phyllis Green The third wolf translocated to Isle Royale this fall runs down the trail just after release while NPS staff observe. Three more wolves were brought to Isle Royale from the western Upper Peninsula last week, bringing the total on the island to 17.

ISLE ROYALE — Will more wolves come to Isle Royale? That depends on what happens the wolves already on the island do over the next few months.

Three more wolves were successfully brought to Isle Royale National Park from the western Upper Peninsula on Sept. 13, ending the translocation for the fall. A fourth wolf was part of the transport, but died on the island the following weekend.

The new arrivals, two male and one female, bring the island’s wolf population to 17, nine males and eight females.

Isle Royale began airlifting wolves to the island last year in an effort to re-establish the island’s wolf population, which had dropped to two. Plans call for 20 to 30 wolves over three to five years.

Superintendent Phyllis Green said the park will hold off on more transports to see if any of the wolves breed over the winter.

The breeding season on the island is in January through March, Green said. The park had intended to bring more wolves to the island in time to breed last year. However, that was delayed by last winter’s government shutdown.

Wolves typically only breed once per year, and then only the alpha male and female of the pack.

“Between now and that time, we’re hoping to see stronger associations between animals, and the development of a pack with two alphas,” Green said.

The first female brought to the island from Grand Portage, Minnesota, has been routinely spotted with two males from Michipicoten Island in Ontario, Green said. The alpha male and female from the Michipicoten pack have also been seen together intermittently.

If the wolves can introduce more genetic diversity to the island, future translocations may be unnecessary, Green said.

“It’s a chapter that’s yet to be written, and the only one that can write it is the wolves,” she said. “All we can do is watch.”

The fourth wolf’s collar sent out a mortality sign the weekend after the latest translocation. Biologists from the National Park Service (NPS) and State University of New York – College of Environmental Sciences and Forestry (SUNY-ESF) located the wolf and confirmed the mortality on Sept. 17, the NPS said in a release.

The wolf’s carcass was sent to the USGS National Wildlife Health Center in Madison, Wisconsin. Results of the necropsy will probably be available in about three months, Green said. Information from the necropsy may be able to inform their practices for future transfers, Green said in a release.

“It may be tough to get answers, because it was pretty warm weather,” she said.

The NPS worked closely with the Michigan Department of Natural Resources (DNR), US Department of Agriculture APHIS – Wildlife Services (APHIS – Wildlife Services), and SUNY-ESF on the project. From Sept. 5 to Sept. 13, they captured seven wolves. The other three were rejected for not meeting the park’s criteria for safe transport. Those include seeing if the wolves have all four fangs, if there are any signs of disease, or any signs of broken bones, among other signs, Green said. They were also yearlings, rather than the adults preferred for transport.

“We want animals to have had some opportunity to hunt in packs and have a good sense of how to survive,” Green said.