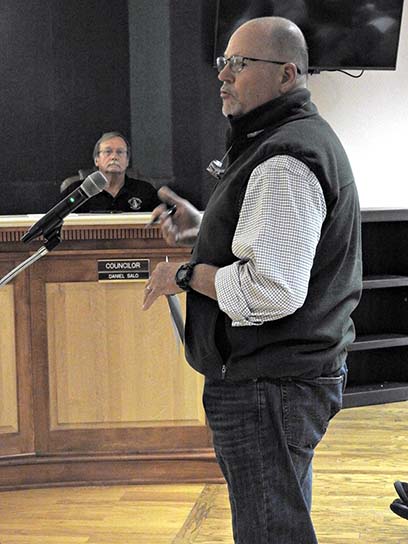 Garrett Neese/Daily Mining Gazette Jon Rector, director of Isle Royale Seaplanes, speaks to the Houghton City Council during a hearing on his request to rezone his property to allow for his business to be located there. The council voted the request down 5-2.

HOUGHTON — Saying it would set a bad precedent, the Houghton City Council rejected a request to rezone a parcel of land on Houghton Canal Road for a seaplane business Wednesday.

Jon Rector, director of Isle Royale Seaplanes, sought to change zoning on his property from R-1 (residential) to industrial, which would allow him to move his business there.

The property was part of 78 acres the city annexed from Portage Township in 2008. The land was zoned R-1 at the time to honor the wishes of its then-owners, which had sought to develop the property.

As Houghton’s zoning administrator, City Manager Eric Waara recommended the council vote against the request. The city’s attorney had said carving out an exception on one portion of the land, the request could be considered spot zoning.

Approving Rector’s request could open the door for other property owners to do the same, Waara said.

“Is this council prepared to have these points argued over and over again, when somebody wants a piece of property that we haven’t considered changing zoning for, and then have to argue one way or another for a different piece of property?” he said.

The service would be consistent with historical use of the site, Rector said in a memo to the council. An earlier seaplane service had operated there in its final years.

“Unfortunately there was a time between 2001 and three years ago when the seaplanes were not on the canal,” he said Wednesday. “So people who have come in during that time frame maybe aren’t accustomed to it. But most of you all who’ve been here most of your lives know the seaplane has been operating here for years.”

The council voted 5-2 against the rezoning, with Councilors John Sullivan and Mike Needham dissenting.

Needham pointed to the support the business had gotten from JRG Development, which owns property adjacent to the site.

“To me, that carries a lot of weight, because that’s one of the things you’re supposed to consider,” he said.

JRG Development had previously opposed the rezoning. In a letter sent to the city Wednesday, it reversed that stance due to a deed covenant enforceable by neighbors that imposes restrictions on the seaplane business.

As part of the agreement, Isle Royale Seaplanes would only conduct 10 flights per day, and restrict operations to between 8:30 a.m. and 6:30 p.m. The business would also only operate between May 15 and September 15, Rector said.

John Fodermaier, who lives nearby on Canal Road, strongly backed the rezoning. As an FAA safety inspector for 30 years with a specialty in seaplanes, he had seen them coexist safely with local boat traffic. He also had “nothing but good things” to say about the seaplane operation, which has been flying over his house for the past year, he said.

“As noise goes on our side of the lake, it’s no noisier than Trail 3 that goes right behind our house, full of snowmobiles every winter,” he said.

While nearby residents gave it a thumbs-up, the project met with disapproval from people who would hear it from the Hancock waterfront. Jennifer Norkol said in a letter to the city the noise from the seaplane business would be a nuisance, and it would disrupt other recreational activity on the canal.

“This would negatively impact our property value, our peace and quiet and our way of life as it stands today,” she said.

Matthew Eliason, lawyer for Isle Royale Seaplanes, said they would probably ask the city council to rezone the entire annexed portion as mixed-use.

“It’s not really viable for residential,” he said. “Maybe in 20 years it will be, but they’ve got the bird in the hand of a great business.”