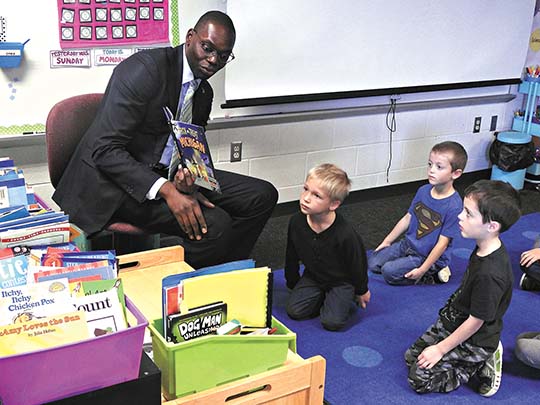 Gilchrist was optimistic a resolution could be reached on the state budget. After congressional Republicans submitted a budget, Gov. Gretchen Whitmer submitted a budget with 147 line-item vetoes and cuts of nearly $1 billion.

Gilchrist said everything is on the table to be restored in a supplemental budget.

“We had to make some tough choices to deal with these flawed budgets,” he said. “But we had to take the gimmicks out and make sure that we can protect public safety and have the government function.”

The Republican budget plan was “fundamentally flawed,” Gilchrist said, including School Aid Fund earmarks for specific vendors and items Whitmer said were unconstitutional, such as dividing the education budget into quarterly installments dependent on benchmarks.

Whitmer has drawn criticism for some cuts, including spending for rural hospitals and secondary road patrols. Asked about the cuts, Gilchrist said the governor’s funding priorities could be seen in the budget recommendation introduced in March, which included $8.6 million for 50 additional state troopers, as well as an emphasis on infrastructure, public education, clean water and closing the skills gap.

Whitmer also reallocated $625 million in the budget through convening a state administrative board, the first time a governor has used the move since John Engler in 1991.

Gilchrist said the budget submitted by Republicans included cuts that would jeopardize public safety, such as cybersecurity funding to protect residents’ information.

“These are things that were put in jeopardy by the budgets that the Republicans passed, so we had to make some tough choices to do that,” he said. “But now we’ve made the choice, as we made the choice all summer to be at the table, ready to negotiate and we hope Republicans will come back and join us.”

One main obstacle in talks was long-term road funding. Whitmer had proposed a 45-cent gas tax increase in March. State Republicans have said any road funding will have to come from existing revenues.

Whitmer vetoed a one-time spending increase of $375 million, saying it was insufficient to address the systemic problem. Gilchrist said he is waiting to see a Republican proposal that generates $2.5 billion annually to maintain roads.

“We are not married to a particular pathway to get that new revenue, but we know that’s what we need to solve the problem, and we actually want to solve this problem,” he said.

The governor’s office had a meeting with the quadrant of top House and Senate members on Thursday, which Gilchrist said was productive.

Gilchrist also discussed the state’s six-month ban on flavored vaping products, which Gov. Gretchen Whitmer announced Sept. 4. The ban has been met with pushback, including a suit from Marc Slis, owner of 906 Vapor in Houghton.

Gilchrist declined to comment on the legal action, but said the ban was a necessary response to a public health emergency. The ban allows tobacco-flavored vaping cartridges while banning flavored ones that could appeal to teens, he said.

“Tackling the public safety of young people in Michigan especially is a priority,” he said. “It’s paramount. It’s why government exists.”

Gilchrist said the state would also look at ways to combat black-market THC cartridges, which Centers for Disease Control has identified as the primary cause of the spate of vaping-related lung illnesses.

“We will always welcome an ongoing conversation about what it means to implement rules that are the most effective, that are most responsive to what’s actually happening on the ground,” he said.

One of Gilchrist’s top priorities as lieutenant governor is criminal justice reform. He is co-chair of a state task force on jail and pretrial incarceration. The task force is looking at the factors that drive jail. The task force is being assisted by the Pew Charitable Trust, which is doing an extensive data analysis, the first installment of which was presented last month.

The task force is about to make its first recommendation on ways to reduce the state’s jail population. One way is by diverting people to programs that can give them the services they need, such as mental health and substance abuse treatment. The task force is also looking at potential changes to sentencing guidelines. It will present its final report in January.

“We expect there to be some important policy changes that will impact the jail population and move us from this overcrowding, this mass incarceration to actually getting people the support they need to be able to be their best selves in their communities,” he said.

Michigan is also expected to play a pivotal role in the 2020 election. Gilchrist said as lieutenant governor, it is his responsibility to make sure residents know how powerful their vote is.

“I would expect that Democratic candidates will show up and connect with Michigan voters directly, and I think the candidates who choose to do that are the ones who are going to perform well here,” he said.

Gilchrist visited the Gazette during a tour of the Upper Peninsula, which started Sunday with visits to Neuvokas in Ahmeek and Orbion in Houghton.

He said the visit was an extension of Whitmer’s premise that “everybody in Michigan matters.”

“We don’t think people should have expect to go to the government to talk with them,” he said. “We should meet them where they are.”

The businesses he spoke to Sunday had encouraged Gilchrist to continue to support programs such as Accelerate Michigan, a competition that gives up to $1 million to startups in the state.

“Part of what we need to do is be a better partner for different types of businesses like theirs and connecting people to resources that have this great technical expertise, but may not have the experience in starting businesses,” he said.