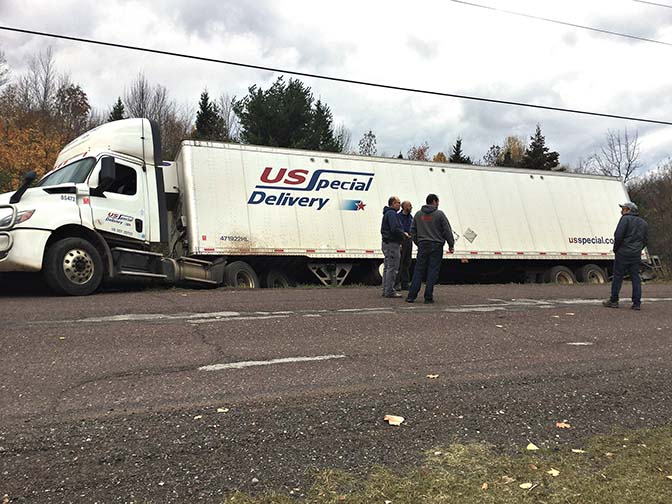 STANTON TOWNSHIP — A semitruck hit a power pole along Houghton Canal Road Monday morning after swerving to avoid a deer, briefly knocking out power to a home nearby.

The Stanton Township Fire Department was called out at 12:08 p.m. for the crash, said Assistant Chief Anthony Lampinen. The driver was uninjured, and there was no damage to the truck, which had landed in a ditch.

“The truck came around, went off the road, caught the pole and pulled the service off,” he said.

The driver, who declined to give his name, said a deer had darted out from behind a tree, startling him.

“The freight didn’t even shift, because I wasn’t driving fast,” he said, pointing to the boxes inside the truck. “It catches the edge, and it just pulls you right in.”

The driver was not cited.

Upper Peninsula Power Co. crews were on scene shortly after the crash and restored power soon after.

Superior Service & Towing pulled the truck out of the ditch around 12:40 p.m., whereupon the driver resumed his route.