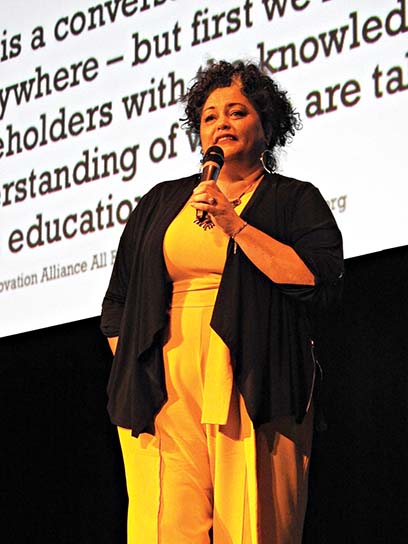 HOUGHTON — Algorithms are only as good as the data that goes into them.

Marika Pfefferkorn, co-founder of the Coalition to Stop the School to Prison Algorithm, spoke at Michigan Technological University Thursday about her group’s successful effort at getting communities in Minnesota’s Ramsey County to stop sharing data on area children. The data being gathered was intended to help predict which students were at risk of future involvement with the justice system.

The agreement between the St. Paul Public Schools, the city of St. Paul, St. Paul Police Department and Ramsey County was approved by all parties in 2018.

Community members did not necessarily have a problem with the goal, Pfefferkorn said, but they did not think there had been meaningful community involvement. Some of the data they based their findings on were already suspect, Pfefferkorn said.

One of the red flags, school suspensions, had been found to be skewed by race, Pfefferkorn said; children of color were eight times more likely to receive out-of-school suspensions than a white student in Minnesota. Forty-three districts in Minnesota had been identified as discriminating against black, brown and indigenous students in 2018, according to state data.

Problems also cropped up with the other criteria. While the algorithm looked at the number of days missed, it did not look at reasons for missing school, which could range from not being engaged with the curriculum to being homeless.

“We felt, although it had some potential, attendance would not be a true reflection of why a student might actually become involved with the juvenile justice system,” she said.

The data-sharing agreement also resulted in law enforcement agencies having information about people that would not have crossed into their territory otherwise, causing potential privacy concerns, Pfefferkorn said.

Community members began an engagement campaign, hosting summits to educate people on the joint-powers agreement and ideas like predictive analytics.

“We realized without full understanding of what was happening, the communities would be left out of the conversation,” she said. “So what we had to do was fill in a gap because these conversations had never occurred on a community level.”

The Coalition to Stop the Cradle to Prison Algorithm included about 20 community organizations, as well as parents and community members. Framing the discussion around the juvenile system-to-prison pipeline also conveyed the point to people better than “joint powers agreement” did, Pfefferkorn said.

The group reached out to experts, whether in data science or the juvenile justice system. To reach even more people, parents made “Tek Talks,” where they relayed their understanding of the agreement and the data sharing and shared them on social media.

“It didn’t come from the authority,” Pfefferkorn said. “It came from folks on the ground that were concerned and wanted to do something about it.”

Also undercutting the momentum of the data-sharing agreement was a security breach in Ramsey County, where 23 addresses affecting 4,000 people had been hacked. (In September, the county revealed the data breach had been bigger than previously stated, impacting about 37,000 people.)

After heavy public criticism, the joint powers agreement was dissolved in February.

For the past six months, the group has met with the school superintendent, mayor and county board chairs to discuss what happened and how to avoid it in the future.

To aid other communities, Pfefferkorn helped launch the Data for Public Good campaign, which is working in cooperation with 25 sites across the country to search for other places around the country that are starting similar data-sharing agreements. They plan to create a heat map that will track emerging trends around the country.

“After we have this first stage of creating the heat map, we’re going to bring together those communities to talk about what they learned, and what are the things that you need other communities to know so we can be on top of this,” she said.

Pfefferkorn’s talk was the first event in the Algorithmic Culture Series put on by Tech’s Institute for Policy, Ethics and Culture. She is also scheduled to have been part of a panel discussion with Michigan Tech faculty following Friday’s performance of “1984” at the Rozsa Center.