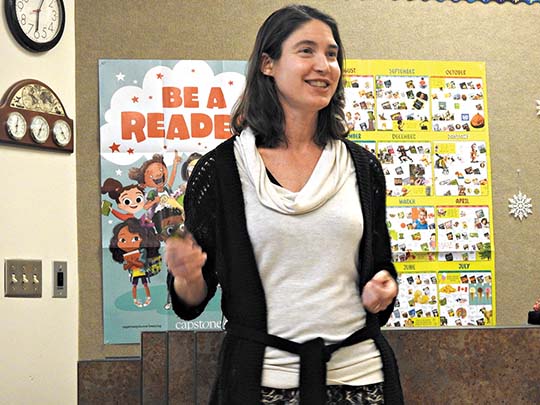 (Garrett Neese/Daily Mining Gazette) Richelle Winkler, an associate professor of sociology and demography at Michigan Technological University and a member of the Census Scientific Advisory Committee, gives a presentation on the census Tuesday.

HOUGHTON — Many areas in the Copper Country are predicted to have a low response rate to the U.S. Census.

That could lead to less federal aid coming to the area, and what its legislative representation looks like.

Richelle Winkler, an associate professor of sociology and demography at Michigan Technological University and a member of the Census Scientific Advisory Committee, gave a presentation on the importance of the census and how it will be conducted at the Portage Lake District Library Tuesday.

The census, done every 10 years since 1790, surveys every residence in America. It will ask how many people live in their home; their gender, age, race and relationship to each other; and whether the home is owned or rented. It also asks if a person is Hispanic, Latino or Spanish, which federal agencies use to make sure areas comply with anti-discrimination provision in the Voting Rights Act and other federal measures.

Census data determines how many seats each state gets in the U.S. House of Representatives; because of declining numbers, Michigan lost one seat after the 2010 census. States also use the data to draw legislative districts.

“The citizen commission that’s going to be working at the state level, they’re going to be using census data down to very small block areas,” Winkler said.

It is also used to determine the destinations of hundreds of millions of dollars in federal aid. In Fiscal Year 2016, $29.2 billion of federal aid went to Michigan.

Governments use the data to decide where schools get built and where aging infrastructure gets repaired. It is also important in the private sector, where businesses, non-profits and researchers use the data.

“All state-shared revenue is by per capita,” said Houghton County Commissioner Glenn Anderson, who is leading the census’s local Complete Count Committee to educate the community on the need to respond to the census. “If you live in any municipality in Houghton County, that affects you.”

Parts of Houghton and Keweenaw counties, including most of the high-population centers, have predicted nonresponse rates of up to 40%, Winkler said.

One reason is because of notoriously hard-to-reach populations such as college students and snowbirds. People are counted wherever they spend the majority of the year, meaning college students from other areas will still put down their Copper Country address, Winkler said. Snowbirds may still be at their winter home when they are first notified of the census, making them more likely to inaccurately report themselves as a resident there.

To count the homeless, the census partners with local groups such as religious organizations or social service organizations.

There’s also relatively low Internet access, particularly harmful for the 2020 census, the first to be mainly conducted online. Remote and aging populations are also less likely to be counted. On the other end, there are also many families with young children, who are also undercounted – by as much as 5% in the 2010 census, Winkler said.

“People just kind of get tired filling out the form and don’t add their younger kids,” she said.

Households will be able to respond online, by mail, or by phone. For more remote areas, census takers will come to the home and conduct the survey directly. The census kicks off in January; a team of dogs takes the U.S. Census director to remote communities in Alaska that are more accessible before the ground thaws.

For most people, the process starts later, and without dogsleds. Between March 12-20, they receive their first reminder to fill out the census. About 95% will come through mail; for the others, a census taker will drop the invitation off directly.

More reminders come in the mail until May or June, when census workers visit homes of people who have not responded.

“The dropping it off is pretty simple,” Winkler said. “Oftentimes you just leave it in a little bag, but knock on the door and talk to them if you can.”

About 500,000 temporary workers are hired to handle the census work. The Portage Lake District Library will host more information sessions in December for people looking to work for the U.S. Census.

“It’s really flexible employment, and it pays decent, and it gives you a chance to participate, from mapping projects to dropping off forms and helping people fill out the census,” said Winkler, who first participated with the census in 2000 as a recent college graduate.

Scammers may also try to take advantage of the census to try to get personal information. Actual census employees do not ask for Social Security numbers, donations, bank or credit card numbers, or anything from a political party, according to the U.S. Census Bureau.

The data collected are only used for statistical purposes, and are kept confidential for 72 years.

More information on the census is available at 2020census.gov.