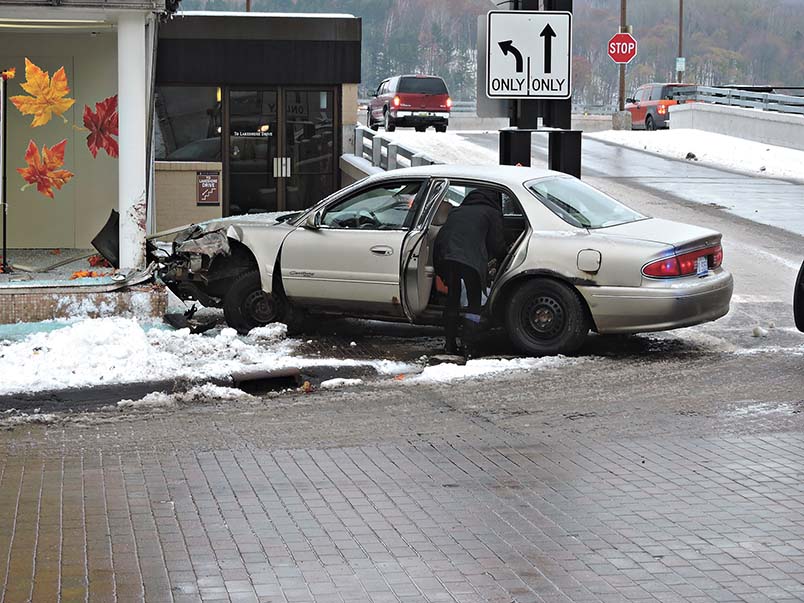 (Graham Jaehnig/Daily Mining Gazette) No one was seriously injured Saturday when the southeast corner of the Print Shop in Houghton was struck by a vehicle.

HOUGHTON — No one was was reported injured in a Saturday incident in which a vehicle traveling north on Pewabic Street lost its brakes and crashed into the southeast corner of the Print Shop, located at 224 Shelden Avenue.

Tom and B.J. Litsenberger, owners of the business said that the vehicle lost its brakes as the driver was headed toward Shelden Avenue. The driver, who is unidentified, was able to successfully evade striking two vehicles traveling west on main street, and was attempting to make her way onto the entrance ramp of the parking deck, but slid and crashed into the building.

B.J. Litsenberger said that two of the windows of the building were broken, but were boarded up the same day. An initial inspection suggested the front windows facing Shelden Avenue require replacement, in addition to the two that were broken, because the impact of the crash shifted the unbroken panes.

“Obviously, we sustained moderate damage,” she said, “and people think we’re closed. But we only lost our display windows, and we are still open for business.”

The Michigan State Police Calumet Post, whose troopers responded to the crash, were not available Monday for details or comment.