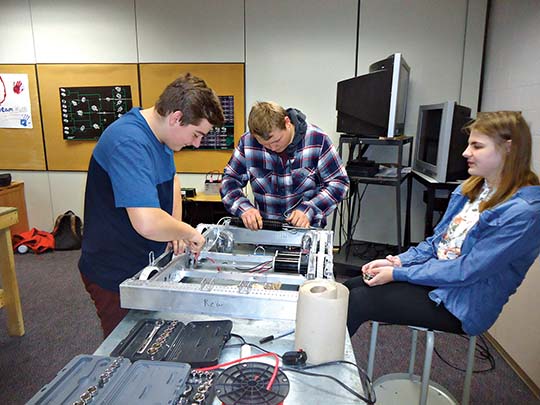 Hancock High School gives students a unique after school opportunity in their Robot Team. The team meets for an hour after school each week under coach Randal McDowell.

McDowell, a Computer Engineering student at Michigan Technological University, had been involved in robotics downstate and was asked to coach Hancock’s team when he came here for school.

The team, made up of 11 junior and senior students, has to design a robot to compete in a task against robots made by other schools.

“The goal changes every year. We find out what the goal is in January and have six weeks to design and build the robot,” said McDowell. “It’s primarily based on design and engineering but there are a lot of other things that need to be done.”

The team is split into smaller groups to perform various tasks including designing the robot with engineering software, developing the programming that will allow them to control the robot, and building and wiring the robot. The team also has a safety officer and has to obtain its own funding by reaching out to area businesses. While the team needs to pay their own way, the metal shop and the Career Tech Center let the team use their equipment – an advantage that many teams do not have, according to McDowell.

With weeks to go before the team learns what their task will be, members are busying themselves with learning everything that they will need to know to build their robot.

“Everyone is kind of learning everything right now,” said team leader and second-year member John Holladay.

One of the ways that team members get their feat wet is through disassembling the robots from previous years to harvest parts. This they do under the guidance of more senior members.

“Last year I joined not really knowing anything but this year I get the concepts of robotics,” said second-year member Ryan Ruoho. “I didn’t play sports last year and figured I might as well do something to keep me entertained.”

The team still has plenty of time to get on its feet. Their first event is on March 5 in Kingsford.