Second storm to hit, though Copper Country spared the worst 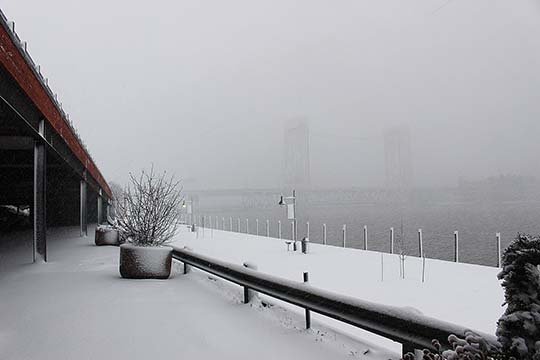 (Joshua Vissers/Daily Mining Gazette) The Portage Lake Lift Bridge, and the view of Hancock beyond, disappeared into the snow on Wednesday.

HOUGHTON — The second winter storm to pass through the Upper Peninsula this week is expected to hit the southern Copper Country.

A winter storm watch is in effect for much of the central and western Upper Peninsula for Saturday evening through Sunday afternoon.

Ontonagon and Baraga counties are among the areas covered, as well as southern Houghton County.

Parts of the Upper Peninsula are expected to receive up to 13 inches. The peak is expected to be in the central and southern U.P., as well as higher-elevation parts of Marquette County.

Though out of the winter storm warning area, Houghton-Hancock is expected to receive 3 to 5 inches Saturday night, with gusts of up to 30 mph.

Snow totals recede further up the Keweenaw Peninsula; Copper Harbor is expected to receive only 1 to 3 inches, but with 35 mph gusts Saturday night.

Like Wednesday’s storm, a low-pressure system coming out of the Great Plains is to blame, said Joe Phillips, a meteorologist with the National Weather Service in Negaunee. Moisture levels in the air are surging ahead of the storm’s arrival.

“As it moves into our areas, there continues to be some weather, heavier snow, kind of like the other day,” he said.

The storm will hit the Upper Peninsula sometime during the day Saturday, with the heaviest portion coming Saturday evening, Phillips said.

The storm should also bring strong winds on Lake Superior, peaking around 10 p.m. Saturday night. The NWS is issuing a gale advisory on Lake Superior from Saxon Harbor, Wisconsin to the Portage Canal. The warning extends from 5 nautical miles offshore to the U.S-Canada border. Sustained winds will be at least 32 knots, with gusts up to 41 knots. Waves could be as high as 20 feet.

Parts of the U.P. were still recovering from Wednesday’s snow on Friday, with UPPCO reporting 1,200 customers without power at 8 a.m. Around 200 of those customers were in the Houghton area, with more in Baraga and Marquette County. Brett French, spokesman for UPPCO, hoped electricity service restored to everyone by the end of the day, but said people should be prepared to take care of themselves in any eventuality.

French said that “all available resources” were working around the clock to restore power, including a large number of contractors.

Some new outages continued to occur through Thanksgiving and Friday, as trees weighted down by snow continued to fall.

They are also preparing for some additional outages during Saturday’s snowfall.

UPPCO’s outage map was disabled Wednesday due to technical issues.

“There were still lingering issues that we’ve been working on ever since to resolve,” French said Friday afternoon.

French said that while the main issue has been repaired, the data was still presenting flawed information and remained disabled. UPPCO’s goal is to have it functioning again on Saturday morning.

Higher than normal call volumes were also calling delays for customers trying to report outages and get information on repairs.

“Some of that call volume has decreased as we work our way through the event and I guess we’re in pretty good shape right now,” French said. “We appreciate everyone’s patience.”

UPPCO has posted periodic updates to Twitter, and French recommends it as an alternate source of information on the outages.

The weather effected electricity service and travel through much of the U.P. UPPCO reported outages from the tip of the Keweenaw Peninsula to Lake Michigan.

The Michigan Department of Transportation announced a portion of M-26 west of Eagle Harbor, which had both lanes closed because of water over the road, reopened Friday morning.