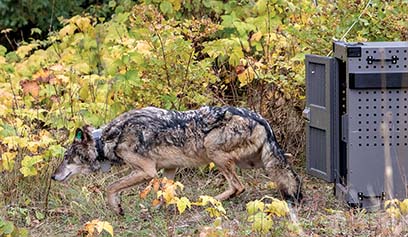 (Photo provided by NPS/Phyllis Green) The third wolf brought to Isle Royale National Park as part of the fall 2019 translocations runs down the trail just after release while National Park Service staff observe. The wolves have responded well to life on the island, subsisting on moose, beavers and snowshoe hare, according to a new summer predator-prey study.

HOUGHTON — When gray wolves are airlifted to Isle Royale National Park, their first meal is one of the moose carcasses left for them at spots around the island.

The wolves have successfully fended for themselves on Isle Royale since, according to findings from researchers studying the new wolves and their effect on the island’s ecosystem.

The National Park Service and State University of New York researchers released findings from the island’s a summer predator-prey study Monday. This was the first summer study done on the island, where a team of researchers has conducted annual winter surveys since the 1950s.

“Combining recent advances in technology with our knowledge of predator-prey relations will provide new insights, not only in the year-round foraging ecology of wolves on Isle Royale, but their overall role in this island ecosystem,” Jerry Belant, professor at State University of New York, said in a National Park Service press release.

GPS collars on the wolves showed areas where they spent extended amounts of time. Researchers then visited the sites – 381 between May and October – to determine if wolves had eaten there. At those sites, researchers found 60 prey animals.

Moose made up 54.5% of the animal remains found at the site, which also showed predation of beavers and snowshoe hares. Of the moose, 63.4% were calves.

This is the second year of a three- to five-year effort to replenish the island’s wolf population, which had dwindled to one infirm, closely related pair. The goal is to bring 20 to 30 wolves to Isle Royale; counting the original pair, the island’s population is now at 17.

Wolves were brought to the island from the Minnesota and Michigan mainlands, as well as Michipicoten Island in Ontario.

The new wolves were intended to counteract a growing moose population, which had been overbrowsing vegetation on the item in the absence of a meaningful apex predator.

Moose numbers exceeded 2,000 this year. That figure is the highest since it reached nearly 2,400 in the mid-90s. Lack of forage and a brutal winter in 1996 cut that number to 500 within two years.