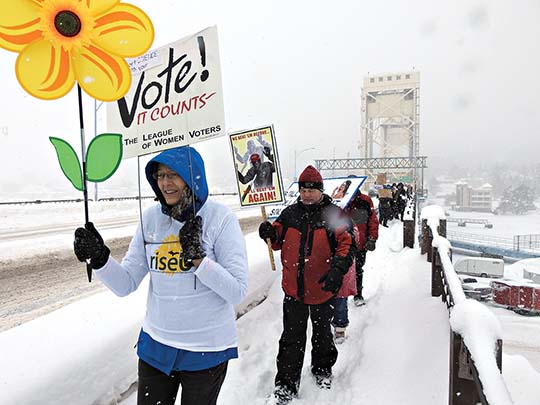 HOUGHTON — Despite a winter storm dumping as much as an inch of snow an hour, close to 50 people walked across the Portage Lake Lift Bridge Saturday for the fourth annual Women’s March.

“We may not be the biggest, but we may be the snowiest,” said organizer Susan Burack.

Houghton’s march was one of about 250 around the country Saturday. RISE UP, the Copper Country League of Women Voters and the Houghton County Democrats participated in the walk.

Though the first march took place the day after President Trump’s inauguration, national organizers conceived of it as not just an anti-Trump protest, but a broader push for women’s rights and other social justice issues. Burack said the three main points of Saturday’s march were reproductive rights, climate emergency and immigration.

“The first year we did it, Trump had just been inaugurated, and we didn’t know what we were up against,” Burack said. “Now we do.” 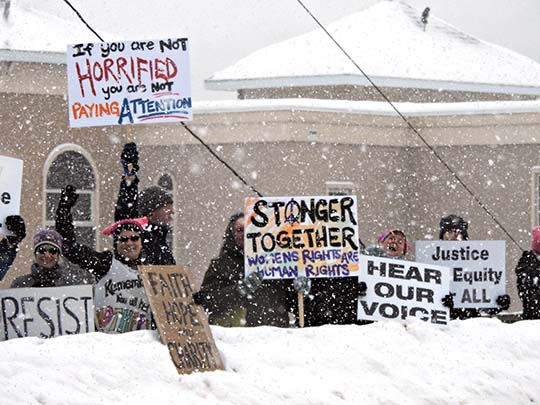 Local signs touched on a variety of issues, with slogans such as “My Body, My Choice” and “Keep Families Together.”

Joyce Wiswell of Hancock just moved to the area in August. She was thrilled to find out there was a local march.

“The fact that we don’t have an Equal Rights Amendment is astounding, despite everything else that’s going on,” she said. “So I’m here to support that, and just make America sane again.”

This year’s march could be the last of the Trump administration. But whichever party is in the White House, Burack thinks the march should continue.

“We still have issues,” she said.