To recycle or not to recycle: Houghton County hears of new $6.3M Marquette County recycling project 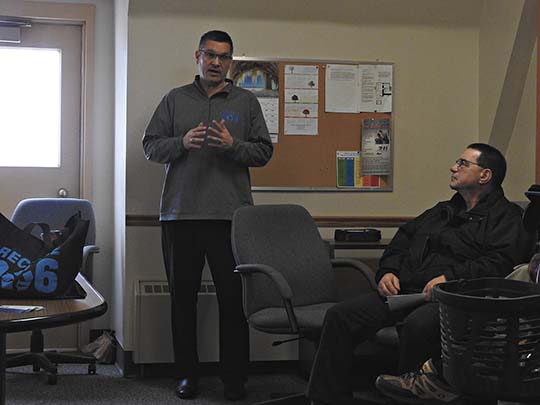 HOUGHTON — A new Marquette County project for single-stream recycling and glass processing could have benefits locally.

Brad Austin, director of operations for the Marquette County Solid Waste Management Authority (MCSWMA), spoke at the Houghton County Solid Waste Committee meeting about the $6.3 million project, which is scheduled to go online this fall.

Construction will begin in February. The facility is expected to be online in October. New machinery is being installed that will enable the county to separate grades of recyclables.

The new facility will also enable Marquette County to process commercial single stream, which it lacks the equipment to do now. Austin predicted commercial would make up about 60% of recyclables.

The upgrade came out of MCSWMA’s evaluation of its recycling program in 2016. Much of the public found the existing system confusing and inconvenient, Austin said. Many recyclables ended up in the landfill, reducing the facility’s lifespan. The two recycling programs in the county at the time were also inconsistent in educating and reaching out to the public.

The county has brought a consultant on board and is finishing a one-page flier that will be sent to county residents, telling them what can be put in their bin and how it can be packaged.

“Contamination is real,” Austin said. “It’s a problem. And it’s one of the single largest issues regarding commodity value and why recycling is struggling the way that it is.”

Regionally, the county hopes to increase recycling capacity for the entire Upper Peninsula, and boost its recycling rate. Marquette County is at 8%, about half the average of Michigan – which itself has the lowest rate among Great Lakes states, Austin said.

“Before we get into upgrades or expansion for more grades or different material, we really want to get this going and see what type of volume we have,” he said.

A grant from the Department of Environment, Great Lakes and Energy (EGLE) provided $800,000. Another $3 million came via a no-interest loan from the Closed Loop Fund, an investment firm centered on building circulating supply chains. To pay back the loan, the county increased its tipping fee at the landfill by $6 per ton of solid waste.

Taking a regional approach to recycling will help the region secure more money from the state to build recycling capacity and education, Austin said.

The landfill had been turning away glass in recent years because of its low market value. Austin said it will convert the glass to sand for the roads on its landfill. The Marquette County Road Commission has also looked at using the sand for county roads. Michigan Technological University is also partnering with Marquette County on a project to convert the product into a substance that could replace fly ash and Portland cement.

Austin also suggested enlisting MTU in competitions with NMU, which will have a zero-waste game on Friday to see how much material can be diverted from the landfill.

The price for processing recyclables will be $20 per ton for trucks coming from outside Marquette County, Austin said.

“You have to move it in volume,” Austin said. “That’s the only way it works.”

Houghton and Hancock have single-stream pickups, which Waste Management takes to Eagle Waste in Wisconsin. One resident asked if the county was interested in having that material brought to Marquette County’s facility.

“We want to teach people how to do this the right way, because that’s how we get there,” he said. “And then the kids go home and they show their parents.”