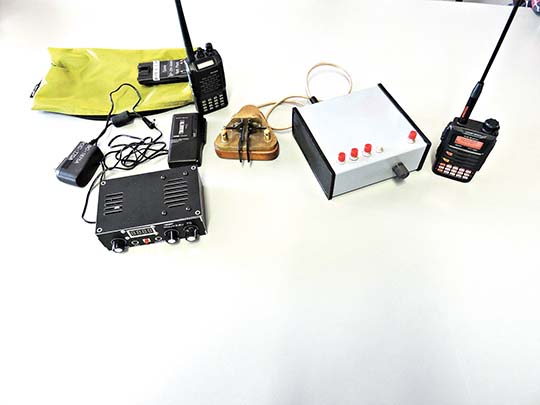 Graham Jaehnig/Daily Mining Gazette The Copper Country Radio Amateur Association (CCRAA) Ham radio club is looking for new and younger members to join and become radio operators. On the upper left, and on the right, are typical amateur radios used today. They are about the size of a cigarette pack but more useful.

HOUGHTON — The Copper Country Radio Amateur Association (CCRAA) invites the public to the Franklin Township Hall this Saturday for an Introduction to Amateur, or Ham, Radio, beginning at 9 a.m.

Don Lafreniere, associate professor of geography and Graphic Information Systems at Michigan Technological University, will give an informative talk on what amateur radio is, its importance to society, and how interested people can get involved.

There is no minimum age to get involved in Ham radio, said CCRRAA Secretary Mary Sears.

“We licensed a 10-year-old a couple of weeks ago,” said Sears. “Anyone can become a HAM radio operator.”

Everyone has heard of “Ham” radio, but few have an understanding of what it is.

Hams must be licensed by the Federal Communications Commission (FCC) to operate two-way equipment from their homes, cars, boats and etcetera, to other Hams across town, across the country, and across the world, and recently, with spacecraft orbiting the earth.

All clubs have members in the Amateur Radio Emergency Service Network, or ARES, said Thurner. That is a network of amateur radio operators who are skilled in handling emergency radio messages from across the United States and Canada.

Sears, Lahti and Jeffery Stricker, club member from Calumet, concurred with Thurner that amateur radio has always, and continues to, provide an auxiliary communications system that proves valuable in times of storm damage, in times when cellular telephone service may be interrupted and power and telephone systems are affected.

For example, during the Father’s Day Flood of 2018, when many telecommunications systems were down, local amateur radio provided vital services.

Lahti told an incident that occurred about four years ago, in which he was a member of a search and rescue unit involved in searching for a man lost in the Yellow Dog area. Troopers involved in the search could not contact the Negaunee State Police Post, because of poor signal in the Huron Mountain area.

Keith Almli, the president of Baraga County Search and Rescue and the Baraga County Repeater Association, was able to contact Randy McClellan, president of the Copper Country club using his Ham radio. McClellan used his land line to call the Michigan State Police Negaunee Post, relay the trooper’s message, then radio back a reply.

“You can look around at us and see we’re all older,” said Thurner. “We’re using this introduction meeting Saturday in hopes of attracting a lot of interested people. Gauging the number of people who attend the event and are interested in becoming involved, we will start classes soon.”