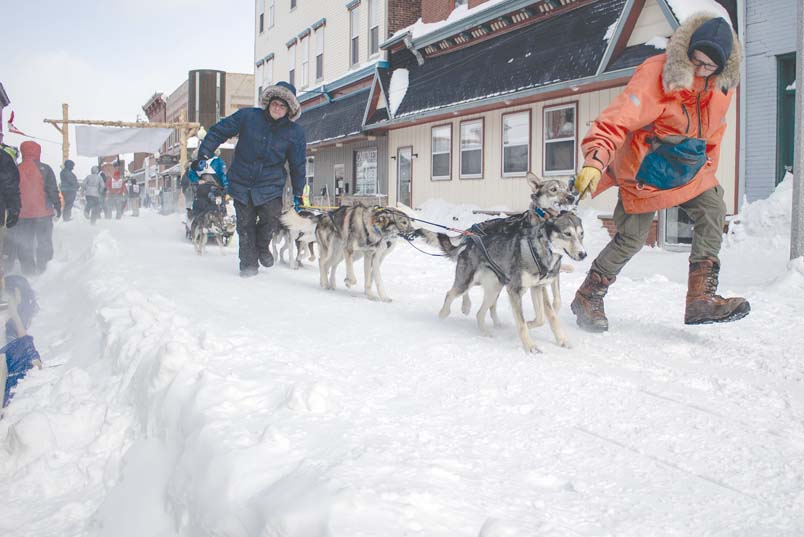 Joshua Vissers/Daily Mining Gazette Volunteer dog handlers lead one of the 2019 CopperDog 150 sled teams away from the finish line in downtown Calumet.

CALUMET — The Copper Country has long set a national standard for its volunteerism, and the annual CopperDog 150 dog sled race that runs between Calumet, Gay, and Copper Harbor is a perfect example.

Aspirus is very proud to be the Official Volunteer Sponsor of the CopperDog, according to the CopperDog website.

“With over 1,500 volunteers annually, the event is a standing example of what a community can do when people come together to make great things happen,” Aspirus states. “Without the efforts and spirit of the volunteers, the CopperDog would simply not take place. Way to go, volunteers!”

Bryant and CopperDog Chairman Doug Harrer have both emphasized that every aspect of the CopperDog organization is comprised of volunteers, from Doug, the chairman, to his daughter, Maddie, who is a 17-year-old junior at Calumet High School.

At the age five Maddie got her first taste of CopperDog when her parents, Amy and Doug, volunteered for a road crossing and followed the race around. Last year, Maddie was asked by Race Director Jeff Foss if she would consider taking charge of the CopperDog’s newest race, the CopperDog 25.

Maddie Harrer, her parents, and Bryant are just three examples of the hundreds of volunteers required to have the race.

“I don’t have the exact number in front of me right now,” said Bryant, who talked to the Gazette from his home in Milwaukee. Bryant, an Eagle Harbor native said that annually, the organization has approximately 400 volunteers.

Volunteers are needed for every aspect of the event, right down to the leadership of the race.

“More importantly, our community volunteers are the dog handlers,” Bryant said. “They help the dogs get to the starting line and the finish line back to their trailers.”

The most important thing that our volunteers do is staff and monitor the road crossings, he added.

“Everywhere that the race crosses the road, we’ve got a group of volunteers there to ensure that the mushers and the dogs can get safely across the roads,” he said. “They stop the dogs.”

At road crossings, the dogs yield to traffic except at those staffed by law enforcement agencies. At some of the larger crossings, such as where U.S. 41 and M-26 intersect at Phoenix, in Keweenaw County, the Keweenaw County Sheriff’s Office monitor that junction.

“Keweenaw County Sheriff’s Office, Houghton County’s deputies, Michigan State Police,” said Bryant, “everybody has been very supportive, and they will have a presence there to stop traffic.”

Volunteerism and community involvement is really the point of the race, he said.

“The point of the race, really, is to create a community event,” he said. “It’s that time of year when people are starting to get a little tired of the snow and the cold, and it’s late in the winter. We want to get people out and be able to see something they can enjoy and participate in by being a volunteer. And it truly does — if you’ve seen the starting line on a Friday night, there’s thousands of people out and there.”

“We have just a sense of thanks to the community for their supportiveness,” Bryant said. “Without the volunteers and the support of the community, the business, we wouldn’t be doing this.”

Volunteers include individuals and organizations. Main Street Calumet, Kiwanis, and all the volunteer fire departments come out, he said.

“Copper Harbor, Eagle Harbor, Allouez, Calumet — all the fire departments come out and help with the staffing at the road crossings.”

“The communities of Gay, Eagle Harbor and Copper Harbor are absolutely critical,” said Bryant. “Eagle River and Eagle Harbor both put out a h*ll of a food spread for the mushers and the volunteers on Friday night, and Gay does, too.”

In Eagle River, the feast is at the community building, while at Eagle Harbor, it is at the township hall, but Bryant said because he is usually at Eagle River, he is not certain where the meal in Gay takes place.

This year, the race takes place on Feb. 28, 29, and March 1, beginning and ending on Fifth Street in Calumet Village.