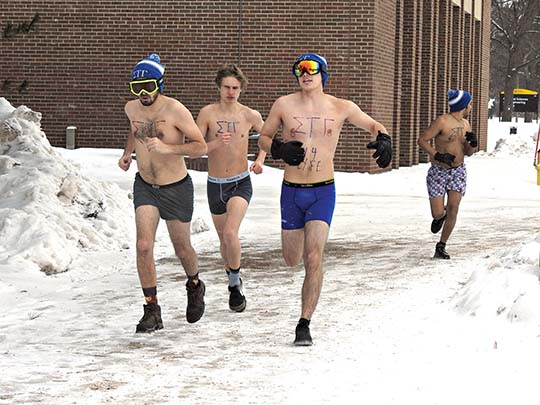 When it is February, and you are running in your underwear, it may seem longer.

This year’s run had raised about $4,400 of its $5,000 goal as of Friday afternoon, according to Sigma Tau’s page on Crowdchange, a crowdfunding site.

Donors could choose a design or phrase to be drawn on specific runners. They ranged from university catchphrases like “#tenacity” to specific jibes like “I could be my mom’s twin if I had long hair.”

The run drew curious onlookers on campus and supportive honks from drivers along College Avenue.

“I’m giving up Taco Bell,” one of the stragglers yelled to bystanders as he ran by the Administration building.

About 35 runners participated this year – mostly Sigma Taus, with a couple of friends of the houses joining in, Hannah said.

“It’s fun, especially when you get a big crowd on campus, running through them,” Hannah said. “It’s nothing something you get to do that often, run a mile in your underwear.”