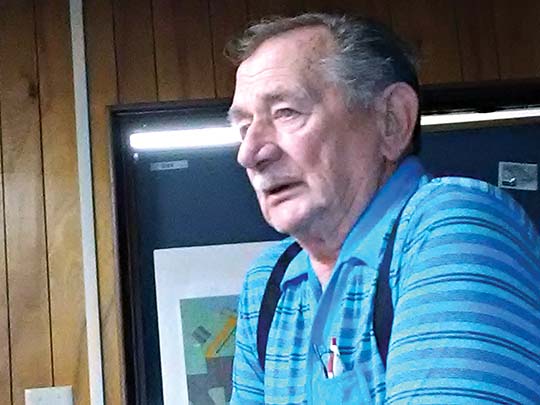 Skip Schulz/For the Gazette Tom Hamilton, an Ontonagon Village property owner, questioned the village’s alleged ownership of a road on Rose Island, of which he states he has records going back to the 1800’s showing who owns the property in question.

For over a year, the Ontonagon Village Council has been questioned regarding numerous issues, including lawsuits and threats of lawsuits.  The questions continued Monday night.

It all started with President Tony Smydra requiring everyone who speaks during Public Comment, including individuals they know and are taxpayers of the village, to state whether they are a resident or not.

This rule was questioned by Jeff Lemke.

“Jeff Lemke, Taxpayer, what is the purpose of the resident, non-resident?” he asked. “Are you saying that whether you are a resident or non-resident, what one says doesn’t matter?”

“We’re not saying that,” said Smydra. “We’re identifying who is a resident and who is not.”

“And the purpose of that is what?” asked Lemke.

Next to speak was Don Kullis who questioned why he has not heard back from village officials regarding the abandonment of Balsam Avenue.

“Non-resident, but taxpayer,” he said.

Balsam Avenue is a non-developed village-plotted street. Kullis wants to build a home on a portion of that village property off of Gorman Street.

Kullis first addressed the council back on Oct. 14.

“We’ve had several meetings, including a special meeting on that with Joe (Erickson, village manager), Elmer (Mark, trustee), others over this issue,” Kullis said. “I need to get some clarification soon what way this is going to go. I’d like to build a house there, but there are a lot of other spots I can build a home on.”

Kullis said he just wants to know where this issue stands.

Trustee Mike Mogen said that during the last meeting they had with neighbors of the property, one of the four adjoining property owners was opposed to the abandonment of the street.

“At that meeting, there is one resident that will not back down,” said Mogen. “Otherwise with your property, you have some very good neighbors.”

Mogen stated that one of the neighbors is willing to have his driveway torn up to get a sewer line to Kullis’s property.

“Is one person going to hold up some progress here?” Kullis asked.

Smydra said another special meeting will be held on the issue.

This was not the only property dispute at Monday’s meeting. Tom Hamilton also brought up the issue of ownership of the road on Rose Island. An issue he has spoken about at numerous Council Meetings.  Once again, Smydra interrupted Hamilton and required him to identify himself and state whether he was a village resident.

“I’m not a resident, but I pay taxes in this town,” Hamilton said.

Hamilton directed his comments to Erickson.

“You should do some history on that Island,” said Hamilton. “You do not own that road.”

Hamilton also brought up the issue about the village putting in the kayak landing and asked why the village did not notify the residents of the Island on that project. He stated that he has records going back to the 1800’s dealing with Rose Island.

“You put the cart in front of the horse, because a couple of us are ready to have a lawsuit if we have too,” Hamilton said. “There’s two lots that go across that road. Now we came to an agreement on that kayak landing.”

Hamilton stated how he is in favor of development of Rose Island.

The village has settled out of court on one lawsuit last year on a personal matter, and has another lawsuit regarding payment of the dredging of the Ontonagon Marina.