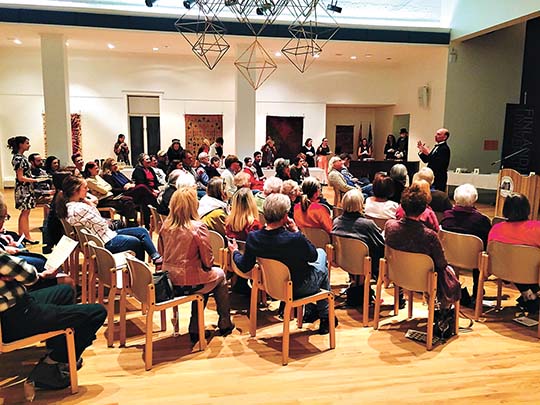 Image provided by the CCCAC The 15th annual Parade of Confections auction is set to take place in the Finnish American Heritage Center in Hancock. The event is a fundraiser for the Copper Country Community Arts Center but has outgrown that venue. Shown at right is auctioneer Brad Baltensperger during the 2019 auction. The Daily Mining Gazette’s own Joshua Vissers is in the middle of the room.

HANCOCK — The Copper Country Community Arts Center in Hancock is hosting its annual “Parade of Confections” on Valentine’s Day evening in the Finnish American Heritage Center. The fundraiser event sees auctions of gourmet deserts as well as a silent auction of pieces by local artists.

“We have volunteers that bake for us and sometimes local businesses will bake and donate special items,” said CCCAC Assistant Director Bonnie Loukus.

The event will also include drinks and snacks, with live music by local pianist Clay Hilman. Following a half-hour social, the parade of confections begins with volunteers carrying the donated confections around the room.

“Everyone who buys tickets gets put into a drawing for a two-day stay at the Keweenaw Land Trust’s ‘Point of View’ property,” said Loukus. The Point of View is a parcel of land including a cabin, an outhouse, and canoe and kayak access and is located on Point Abbaye in Keweenaw Bay.

Around eighty people are expected at the event, which the CCCAC has been holding for the last fifteen years.

“It started out in the Art Center, but it just kept growing,” said Loukus.

The Parade of Confections was started by a past board of directors with a love of food almost equal to their love of art, according to CCCAC Director Cynthia Cote. While many of their other food-related fundraisers have gone by the wayside in intervening years, the Parade of Confections has remained on the calendar due to popular demand.

“We used to have this board, years ago, and they were very food centric. We had so many food related events … this idea came out of that time,” said Cote. “It’s one of those fundraisers that was really successful in raising a significant amount of money.”

The event is also successful because the donated deserts come from people and businesses that may not otherwise be associated with the CCCAC, leading to larger community engagement than many of their other events, according to Loukus and Cote.

Confections available for auction include a lemon cheesecake with raspberry and cranberry compote made by local cookbook author Kris Shourek, a four-layer chocolate cake with chocolate ganache filling made by Diane Eschbach of Celebrations, and a Vegan tiramisu dreamcake made by Carly Williams of the Keweenaw Co-op.

The Parade of Confections begins at 6 p.m. on Friday, Feb. 14, in the FAHC on Quincy Street in Hancock. Tickets are available for $10 each from the CCCAC, also on Quincy Street. For more information, visit coppercountryarts.com or visit the CCCAC on Facebook.