US looking for help with census taking 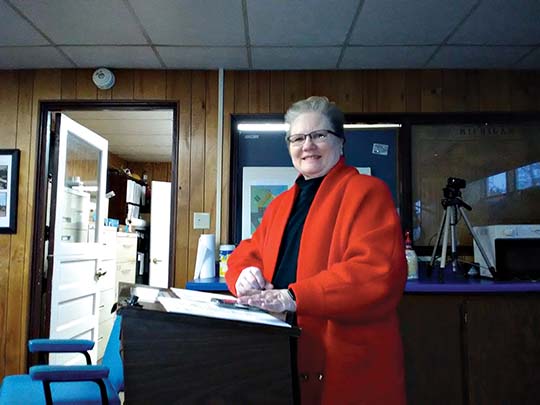 Skip Schulz/For the Gazette Marti Wegner of the US Census Bureau was in Ontonagon looking to recruit people to be census workers.

Over a century ago the poster of “I want you for the US Army” was produced.  For 2020, it is not just ‘“Uncle Sam” that wants you, but also Aunt Marti.

Marti Wegner spoke at Monday’s Ontonagon Village Council meeting. She addressed the council as to the importance of the 2020 US Census.

“The census wants a lot of information. They want this information for a lot of different reasons,” Wegner said. “The questions they ask you. They are collecting data that can be used by future businesses that may wish to locate here.”

Wegner gave the analogy of the demographics in Iron County where half of the residents are 65 and older.

“I suspect that is true of Ontonagon County as well,” she said. “As such, when a business comes here, like a store or restaurant, they need to know. If they build a building they need more handicapped restrooms or access.”

The other reason Wegner was in Ontonagon was to recruit people for the 2020 Census jobs.

“They will also get 58 cents per mile,” she said. “They will go out with a little hand held computer, slightly larger than a cell phone.”

She explained how the equipment provided has GPS program to describe how to get to the first house.

A folder was handed out to the council and the media explaining the importance of the census. In it was the explanation as to how important an accurate count is needed.

“From determining the number of seats each state has in the U.S. House of Representatives to planning for roads, schools, and hospitals, an accurate count is crucial,” as stated in the explanation.

While the census worker will ask many questions, Wegner stated that a person does not need to answer the questions if they do not feel comfortable.

She explained how the census workers will only be going door to door to those that do not fill out the Census information sent to them in the mail, or those that do not have a specific address, but receives their mail via a Post Office Box number.

In an effort to recruit census workers, Wegner said that the individual can choose his/her own hours. Interested people are directed to apply online at 2020census.gov/jobs or to call the toll-free number at 1-855-JOB-2020.