Businesses, police between a rock and a hard place 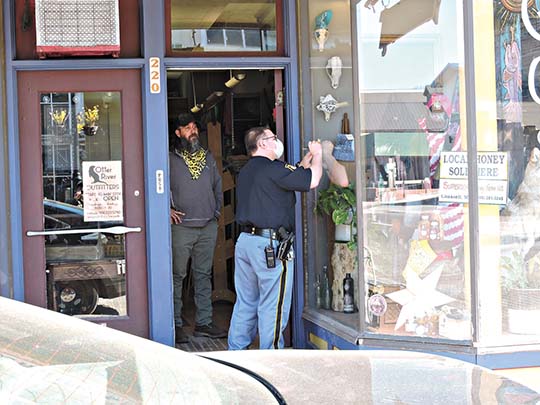 Graham Jaehnig/Daily Mining Gazette Houghton Police Lt. Nick Roberts was sent by the Houghton County Prosecutor, Brittany Bulleit, to compile a police report on Mike Kowalczyk’s defiance of her issuing an order for him to shut down Otter River Outfitters on Tuesday, after she read in the Daily Mining Gazette that the store had re-opened due to financial hardship, and the precautions the owners were taking to protect their customers from the risk of COVID-19.

While other businesses along Shelden Avenue were open for business, the police officer sent to Otter River said that he was not instructed to make arrests or issue citations.

“He did make it known that he was not here to give me a ticket, he was not here to arrest me,” said Mike Kowalczyk, owner of the business. “He was here to write up a report, and he would have to give it to the prosecutor, and then we’ll go from there.”

The report, said Kowalczyk, was to report to the prosecutor that Otter River Outfitters had been ordered to shut down on the 19th, violated the order by opening on the 20th, and re-opening on the 21st, “even though the U.P. is allowed to open up at 12:01 a.m. on Friday.”

Kowalczyk said he feels that with the number of other businesses in the area open for business, accepting curbside, as well as walk-in clients, customers that Otter River Outfitters to be singled out because of a news article is discriminatory and intimidation.

Kowalczyk may be correct.

Several other businesses in Houghton County have opened within the week, and according to Roberts, they have not been asked or instructed to order them to shut down. In fact, he said the number of complaints regarding businesses re-opening has been very low, initially thinking the Western U.P. Health Department had requested the prosecutor’s office to act.

“I thought it was the Health Department, but it was actually the prosecutor,” said Roberts. “This all came from the article in the Gazette; it was very precise and well-written on how they were going to do that (safeguards to protect the public), so she asked us to go and investigate it.”

In this instance, the police are “between a rock and a hard spot.” Roberts said the Houghton Police Department appreciates what the community has been going through.

“They have our sympathies,” he said. “We believe in the community we live in, we understand their frustrations.” He added, however, that when the department receives an order or an instruction to act, they are obligated to follow the order or instruction.

Kowalczyk, likewise said he has been amazed at the professionalism and the kindness of the police through the incident, saying he sympathizes with the position into which the officers have been thrust.

“I would never want anybody else to go through this, I hope no one has to,” Kowalczyk said. “I think America is strong, and I think we will make it through this, and go from there.”