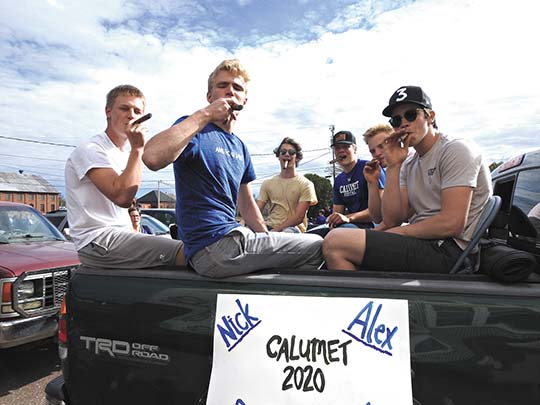 While awaiting the start of a parade in their honor through Calumet and Laurium, some of the reunited Class of 2020 reflected on the surreal end of their high school days.

“Instead of graduating with a bang, it ended with a fizzle,” said Calumet High School senior Melissa Helminen. “We didn’t really get to say goodbye to anybody. We were just at school and it ended.”

“It’s just weird that we had our last day in school and didn’t know it,” said Molly Helminen, one of Calumet’s class valedictorians.

When word came down that in-person classes would be shut down for the rest of the year, Cam Kauppinen was downstate with the Calumet High School hockey team, who was competing in the state playoffs.

After becoming certified as a registered nurse assistant, Gloria Hendrickson has been working at Canal View. The premature end of going to school was bittersweet, she said.

“It’s been really tough, but there’s been great opportunities that came out of it,” she said. “Just working a lot more, and realizing what you should be thankful for.”

Hendrickson’s been missing getting to see her friends every day. Moving to online classes also made it harder to stay motivated.

“You weren’t going to class to do it, you had to make time to do it,” she said.

Elijah McParlan misses the bonfires and paintballing that would normally happen at the end of the year. He also had a bustling business selling cans of Mountain Dew at school. The business — whose “Buck-A-Dew” was painted on the side of his car for the parade — netted him $1,500 this year, he said. He also sold custom T-shirts.

“I think making a grand at school selling T-shirts is something I’m never going to forget,” he said.

Since school ended, McParlan has been making money working as an intern with the Houghton County Road Commission.

McParlan enjoyed coming back for the parade.

“You see a lot of kids you haven’t seen in a while,” he said.