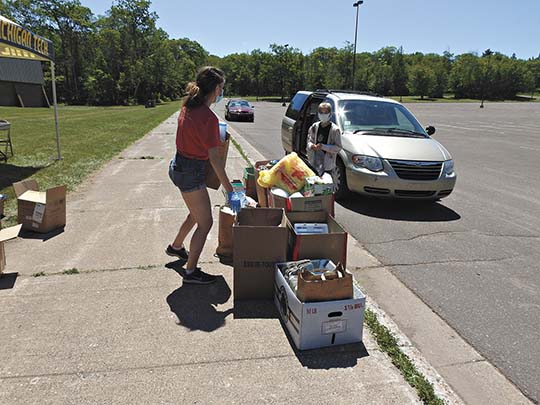 HOUGHTON — The organizers of Saturday’s inaugural Waste Reduction Drive came up with the idea, they figured it would go one of two ways: really good or really bad.

They were “floored” by what they saw.

“This event has shown me how sustainably-minded our community is,” said Rose Turner, coordinator for the Sustainability Demonstration House. “People are saving these items. People have brought items saying ‘I have been saving these plastic bottle caps for years because I was waiting for an opportunity to properly recycle them.'”

The event, put on by the Sustainability Demonstration House at Michigan Technological University, collected forms of household waste that aren’t included in local curbside recycling plans.

Those items were chosen because they are things community members use every day, Turner said.

With a half-hour left in the event, 130 people had stopped by, several bringing combined hauls from other households, said volunteer Nathan Hatcher.

The “reduce, reuse, recycle” phrase is in descending order of impact, Hatcher said. He also added the word “rethink” ahead of it.

His previous college had held an annual event at which 1,000 cars such as hangers, shoes, styrofoam, electronics and other materials.

“I believe this can be a larger event very easily,” he said. “It just needs some awareness and some support … We’ve gotten very good feedback at least about wanting this to happen the same time next year or more than once a year if possible,” he said.

Everything collected Saturday will be set aside for two weeks to eliminate any COVID-19 contamination. After that, they will be weighed to determine how much material was saved from the landfill. From there, it will go to various groups to be reused or recycled.

Batteries will be recycled through Remy Battery. Plastic bottle caps and rings will be sent to Preserve, a company that converts them into toothbrushes and kitchenware.

The plastic bags will be recycled through Walmart, which accepts any plastic bag with a recycling number. Bar wrappers are going to TerraCycle, where they will be melted into a hard plastic for manufacturing.

Egg cartons will go back to local farmers to be recycled.

“We want to reuse over recycling whenever we can,” Turner said.

Karen Oppliger, a biology student at Tech, brought in two large shopping bags of material. She appreciated bringing awareness of what people can do beyond mainstream recycling.

“I think some people get confused about what you are able to recycle, so they just throw everything in recycling,” she said. “But that causes problems at the recycling center because they can only take so much. They have to sort through it or they throw it all out.”