Plans are in place to make necessary repairs 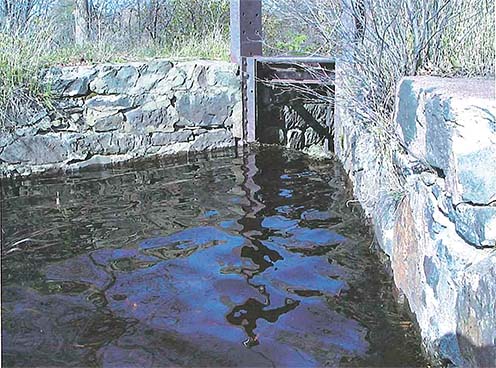 EGLE file photo The aging masonry of the Calumet Dam spillway’s inlet in 2007, before the current wooden walkway was built.

The Calumet Dam across Slaughterhouse Creek in Calumet Township has received increasingly negative ratings from the state for the condition of its spillway and embankments. However, the hazards in the event the dam fails are negligible, and the excess capacity of the dam makes heavy runoff relatively manageable.

An inspection report filed in 2007 with the Michigan Department of Environment, Great Lakes, and Energy and obtained through a Freedom of Information Act request, was largely positive about the dam.

“In general, the Calumet Dam does not have any obvious deficiencies that could lead to an immediate failure of the dam,” stated the inspection report, which was completed by Traverse Engineering Services.

It went on to recommend clearing and repairing the 3-foot wide spillway, replacing the walkway over the spillway, and removing the trees and brush from the 1,200-foot long embankment. Tree and brush growth can damage concrete, provide cover for burrowing animals, damage the embankment by falling or dying, and create seepage paths for water along their roots.

“The dam and spillway are not in imminent danger of failure,” the report concludes. “The maintenance items listed above are recommended to extend the life of the spillway and the embankment.”

The walkway over the spillway, part of a trail around the dam reservoir and part of Calumet Lions Park, was replaced with a new wooden bridge.

The next report, filed by an inspector from downstate in 2012, recommended immediately beginning the budgeting and planning for repair or replacement of the spillway.

“It is clear from observation of this dam that operation and maintenance have been given little attention in the recent past,” it said.

It also renewed the recommendation for removing the trees and brush along the embankment, but acknowledged the low hazard potential in the event of a dam failure.

“The low hazard potential rating for this dam is appropriate,” it stated. “Despite the overgrown vegetation covering the dam embankment and general poor condition of the spillway, this dam does not exhibit any indications of structural instability. No further structural stability analyses are warranted at this time.”

However, in their 2017 report, although the embankment continued to be in relatively good condition, the inspector lowered the dam’s condition rating from “poor” to “unsatisfactory” because of the spillway.

“The 2007 inspection report identified deteriorated steel angles and deterioration of the steel plate gate in the spillway and recommended replacement of both. That recommendation is repeated here. Given the condition of the rock, masonry and steel components of the spillway, the owner should immediately repair or replace the spillway,” the report stated.

The dam is owned and maintained by Calumet Township, and the current supervisor said they would like to meet the inspector’s recommendations, but the cost is difficult to meet for the township. Having been turned down for other grants, the township is in the process of applying for a FEMA grant through the Michigan State Police for $125,000 to repair the spillway and do some brush removal.

“We are still in the running for that grant,” Gasperich said.

If approved, the township would still have to provide 25% matching funds on the amount of the grant.

“I’m sure we would,” Gasperich said. “These are expensive projects.”

The township has been hesitant to simply tear out any trees or brush.

“I think that would compromise the wall,” Gasperich said. “We may go out there and trim some of the trees back.”

If the danger involved in a failure of the dam was greater, he thinks the maintenance would be a higher priority, but there’s little at risk downstream from the dam except a local road almost half a mile downstream.

“Not that we aren’t concerned, we just feel that the impact wouldn’t be terrible,” he said.

Even with a poorly-functioning spillway, the dam is considered to have adequate spillway capacity because of its 3 feet of freeboard (space between the water level and the top of the dam).

“…even without the spillway operating, the dam can theoretically hold all the water from a 100-year flood with more than half a foot of freeboard to spare,” the 2012 report states.

The dam, originally built in 1920, was constructed to provide water to local mining activities. The stone and earth embankment is about eight feet tall. The drainage area to the dam is about .65 square miles and the surface area of the reservoir is roughly 38 acres.