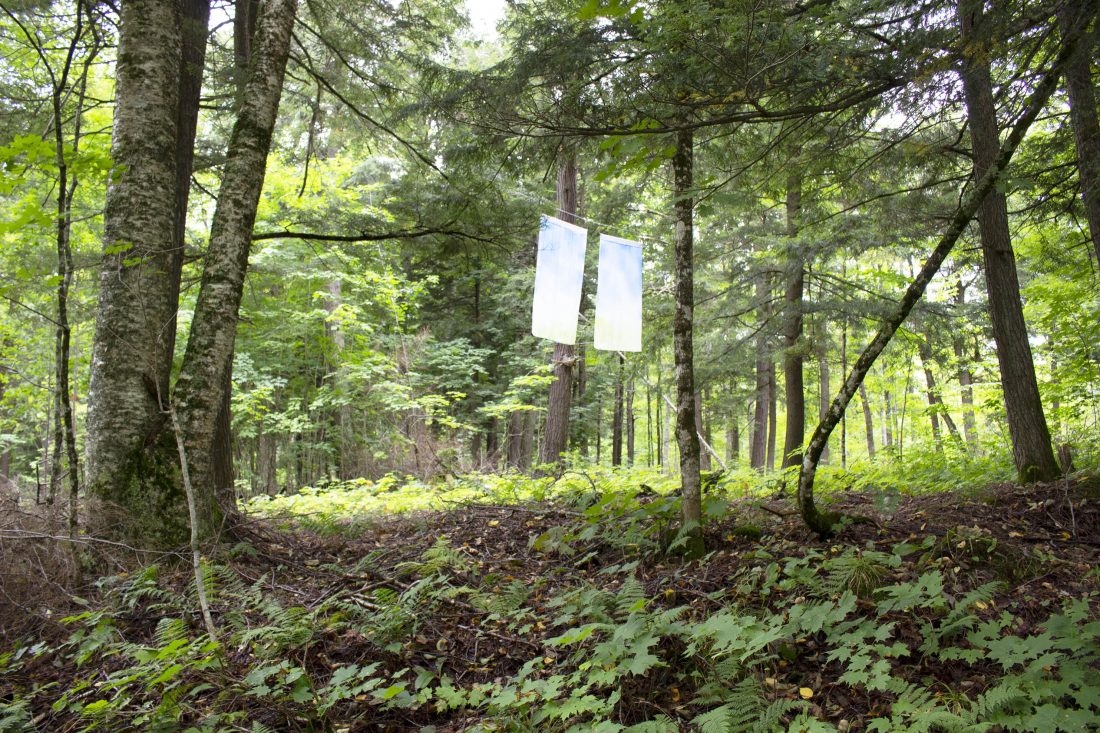 (Joshua Vissers/Daily Mining Gazette) The dyes used in the banners are water-based, and have faded over the summer. Beffel hopes they will turn white to coincide with the first snowfall.

“I fell into art in high school because my drafting teacher told me I couldn’t draw,” Anne Beffel said.

Whatever her teacher’s intentions at the time, it seems to have worked out for Beffel.

She earned degrees at University of Michigan — for art and design — and University of Iowa. She participated in the Whitney Museum of American Art’s Independent Studio Program in New York City and has worked on projects from there to Seattle. Since 2013, she’s been an artist and Professor at Michigan Tech.

This summer, Beffel unveiled the Contemplative Forest Art Walk, currently installed on a short trail near the back of MTU’s Ford Center, south of L’Anse.

The project borrowed on expertise and effort from across the school, including the School of Forest Resources and Environmental Science, the College of Arts and Sciences, the Department Visual and Performing Arts, and Wadsworth Residence Hall, as well as support from the Office of Institutional Equity 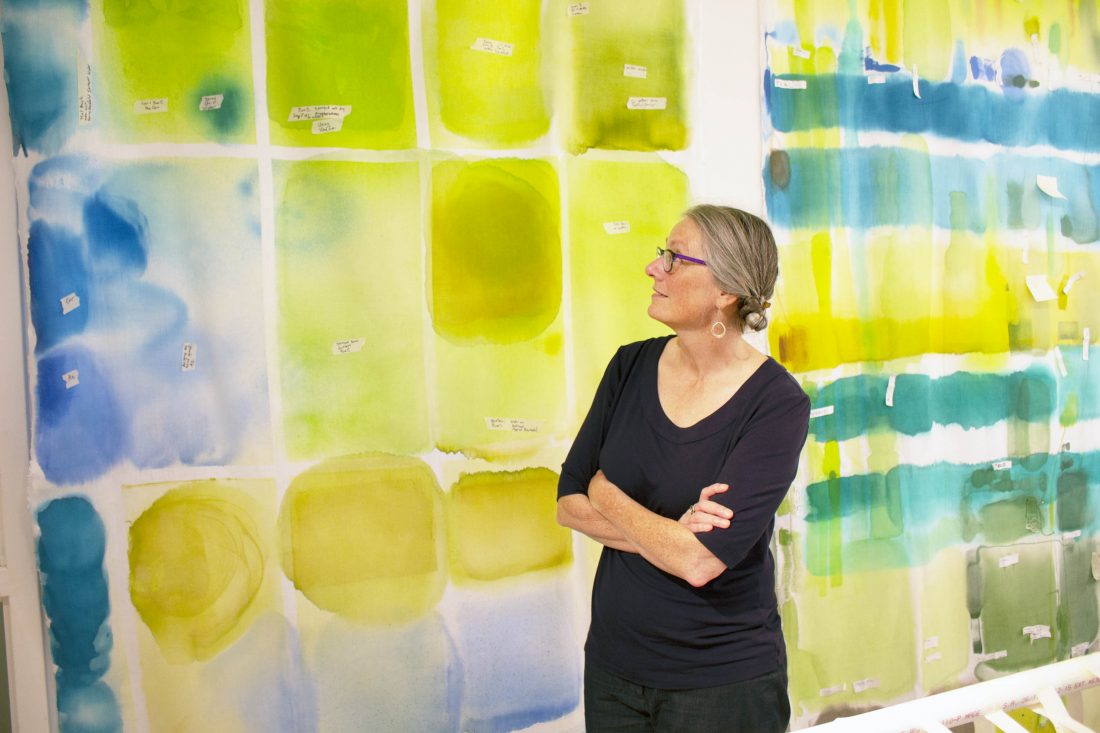 (Joshua Vissers/Daily Mining Gazette) Anne Beffel looks at a few of the color tests she did in her studio to find the shades of blue, green and yellow used in the banners.

“There are all kinds of engineering criteria,” Beffel said. “It was a really complex endeavor.”

The work, intended to encourage mindfulness and contemplation, consists of benches and large hemp-cloth banners hand-painted with water-based paint and hung from trees in the forest.

Beffel and her collaborators had to consider the height and spacing of the banners, how to keep them from sliding, breaking or tangling in the wind, how to provide for good sight-lines, how to prevent damage to the trees, and more. Beffel selected the cloth specifically for how it moved in the wind, and tested hundreds of color combinations.

The area of the forest was selected for it’s diversity in the size of the trees, shades of green, the openings in the canopy, and more.

“I spent weeks walking those acres, and getting lost, which was great,” Beffel said.

The space near the Ford Center was chosen in large part for its accessibility.

The work is a part of ongoing collaboration between disciplines at MTU.

“This is not a one-off project,” said Andrew Storer, Dean of the School of Forest Resources and Environmental Science.

Another cross-discipline project is window decals, designed to not only prevent bird collisions, but also to be aesthetically pleasing to humans.

Storer says that while foresters and other experts see details like diversity of species when they walk through a forest, most average people simply find it “beautiful”.

“Clearly, aesthetics of a forest are really important,” he said.

“We want them to see natural areas with as broad a perspective as possible,” Storer said.

Beffel says she learns a lot from being surrounded by STEM-focused experts, too. She said that, when working on a project with people who value the contributions of others and emphasize adaptability, the uncontrolled and unexpected can be incorporated in the system, making it stronger and more diverse.

“We found that our goals and values are very much aligned,” Beffel said.

One of those values is the idea that diversity brings well-being. For foresters, it means diversity in an ecosystem, Beffel looks for diversity in colors, sounds, and so on.

The Contemplative Forest Art Walk will stay at the Ford Center as long as it can be safely maintained by Beffel and the MTU foresters assisting her. More information, including maps, can be found at Beffel’s website, annebeffel.com.

(Joshua Vissers/Daily Mining Gazette) The dyes used in the banners are water-based, and have faded over the summer. Beffel hopes they will turn white to coincide with the first snowfall.

(Joshua Vissers/Daily Mining Gazette) Anne Beffel looks at a few of the color tests she did in her studio to find the shades of blue, green and yellow used in the banners.