From ear to ear

Houghton hosts the first doctor in the U.P. to offer cochlear implant services 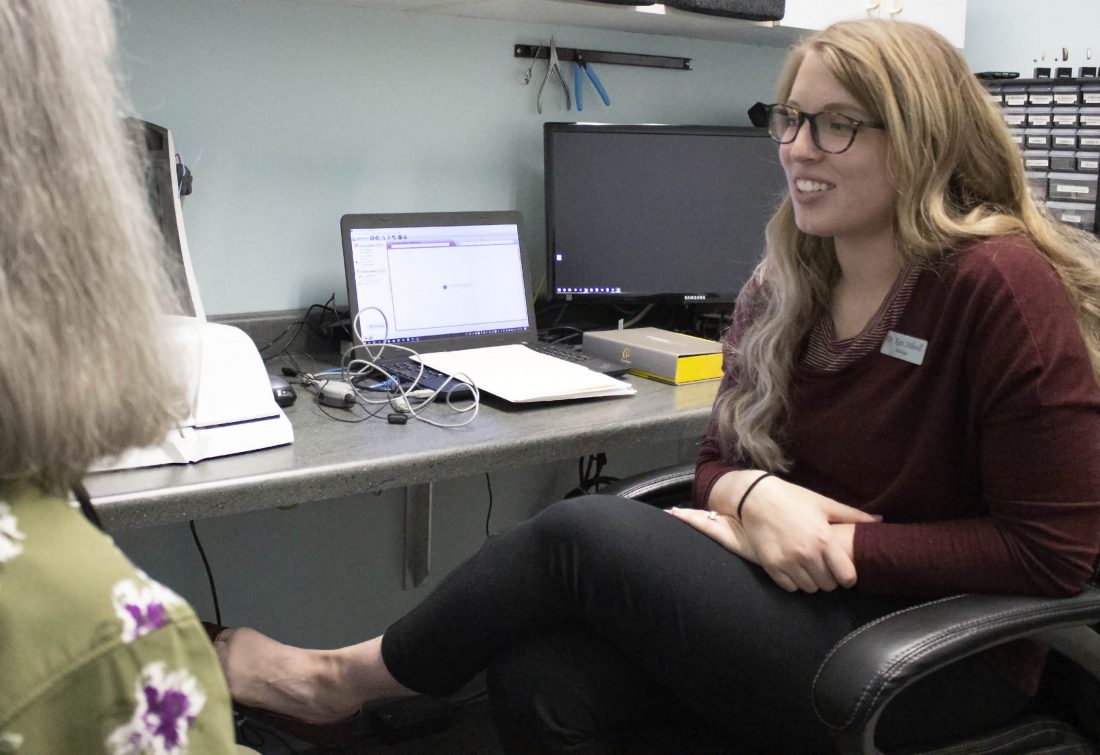 (Joshua Vissers/Daily Mining Gazette) Dr. Kati Stilwell talks with Connie Cretens, her patient, in her Houghton office. Cretens requested her face not be photographed due to recovering from recent surgery unrelated to her cochlear implants.

“This is new to me,” Connie Cretens told Dr. Kati Stilwell during her recent appointment.

Cretens, 65, was describing all of the extra sounds she has to filter with her new cochlear implant. Car engines, fans running, conversations that she’s not involved in, and other background noise are sounds she’s never had to ignore before.

“I know I’m hearing things I didn’t hear before,” she said.

(Joshua Vissers/Daily Mining Gazette) Connie Cretens pulls back her hair to show off one of two cochlear implants she has. She’s the first person in the world with her condition to get one, she says having two makes her an over-achiever.

(Joshua Vissers/Daily Mining Gazette) Dr. Kati Stilwell talks with Connie Cretens, her patient, in her Houghton office. Cretens requested her face not be photographed due to recovering from recent surgery unrelated to her cochlear implants.

Cretens is the first in the world with her condition to get a cochlear implant, and now she’s on the verge of getting her second one activated. She agreed to allow the Gazette to sit in on one of her appointments at U.P. Audiology in Houghton.

Cretens was born with craniometaphyseal dysplasia, a rare condition that causes overgrowth of bones in the skull to the point that it crowds out nerves. 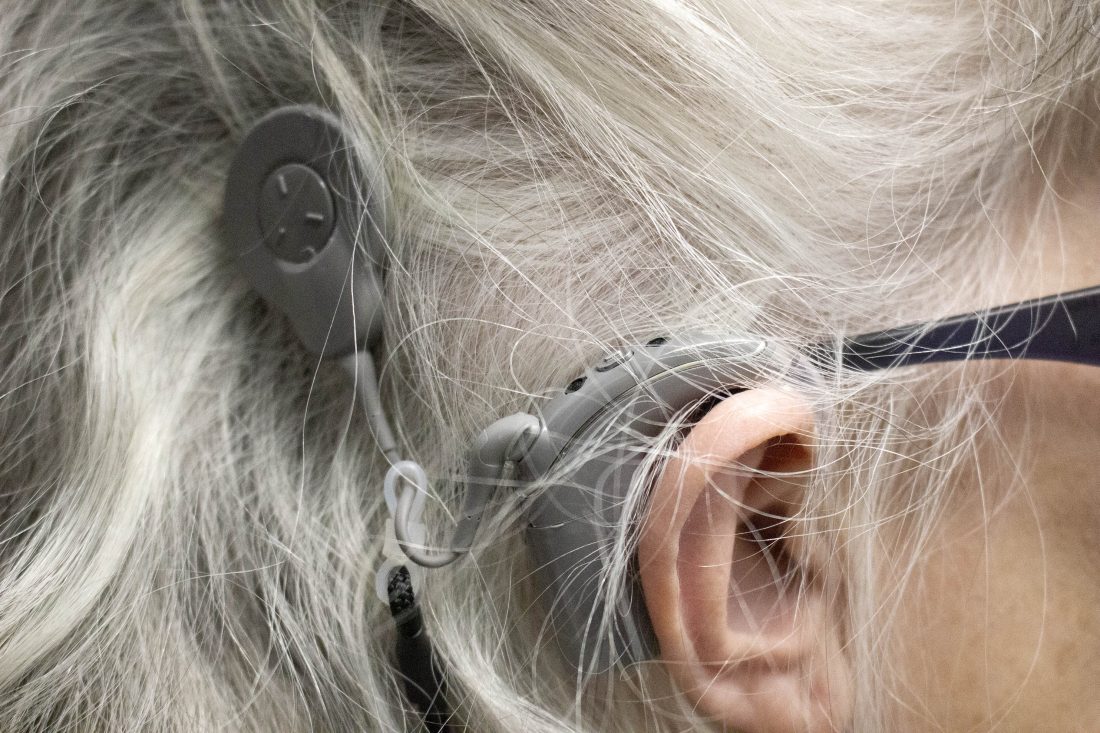 (Joshua Vissers/Daily Mining Gazette) Connie Cretens pulls back her hair to show off one of two cochlear implants she has. She’s the first person in the world with her condition to get one, she says having two makes her an over-achiever.

This condition has impacted her life in many ways. The nerve damage caused by excessive bone growth has caused some muscle paralysis, distortion of her facial features and caused deterioration of her sight and hearing as she grew up. By the time she turned 20, Cretens was legally blind and relying on hearing aids.

The bones in her ear continued to grow improperly through her life. She relied on hearing aids heavily, which she paid for out of her own pocket.

However, hearing aids gradually helped less and less, particularly when they switched from analog to digital formats, she said. Eventually, Cretens was limited to one German brand that worked well for her, and she started avoiding situations where her loss of hearing made things difficult or uncomfortable. 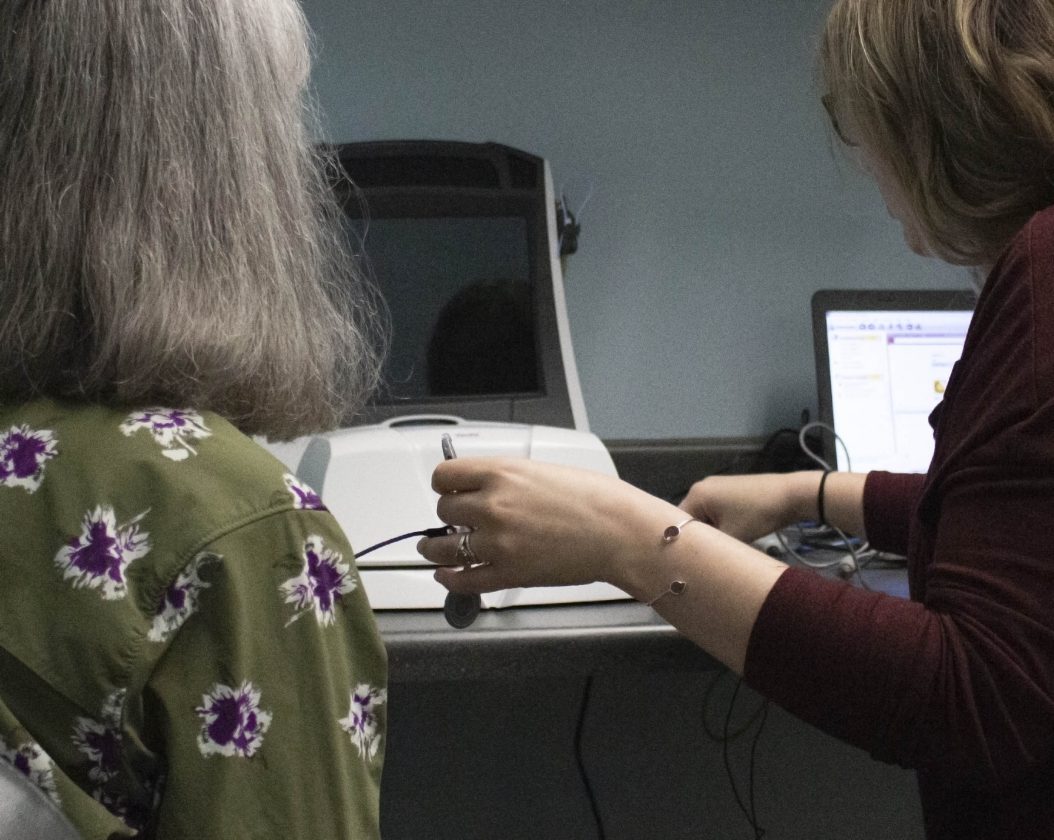 When she was evaluated for her first cochlear implant, her hearing was measured at 20% on her right ear and 50% on the left.

“It was pretty low,” Cretens said.

The evaluation is one of the ways that her condition complicates the implant process. Typically, the evaluation is done through the somewhat porous mastoid area of the skull, but Cretens’ dysplasia had caused it to grow completely solid. Instead, her doctor used various scans including an MRI to evaluate Cretens’ eligibility for implantation.

The first implant, on her right side, was first activated for Cretens in April, and does a lot more than simply amplify sounds the way a hearing aid does.

“Sometimes the inner ear is so damaged — from genetics, noise exposure, medication, viruses, diseases, etc. — that hearing aids are no longer enough,” Dr. Stilwell explained. “The cochlear implant is able to bypass the damaged portion of the inner ear to effectively deliver sounds to the patients.”

Since getting her implant activated earlier this year, Cretens said her life has improved.

“I can be more involved in what I’m hearing,” she said.

The implant gives her many options that hearing aids never did. Among other things, it can connect directly to many devices via bluetooth, has an adapter for her TV, and it connects with a portable microphone she can hold near people or other things she’s having trouble hearing.

“It helps me navigate the world,” she said.

Cretens can hear approaching cars as she crosses the road now, rather than relying on her very limited sight. She can hear something hit the ground if she drops it or knocks it over, she can listen to hear if certain appliances are on or not, and she can hear conversations better than ever, too. Before, she had difficulty talking on the phone, but now her iPhone connects directly to the implant.

“It rings right in my head, nobody (else) hears it,” she said.

Since the device doesn’t emit sounds externally, there aren’t feedback issues like hearing aids have, even when the “volume” is turned up high.

All of this makes a big difference for Cretens, who has lived alone since college and still maintains a high degree of independence. While she lives in Marquette, she travels for many of her appointments. There are no doctors in the U.P. who perform cochlear implant surgery, and U.P Audiology in Houghton is the first, and currently only, place in the U.P. to get evaluated for the implants and get them checked and tuned, according to Dr. Stilwell.

Cretens rides the bus or takes a taxi alone to all of her appointments. Depending on her destination, the solo trip is as long as 20 hours. She’ll be making that trip — to the Mayo Clinic in Rochester, Minnesota — this week to get her second implant activated by her surgeon. After that all of her monthly follow ups will be in Houghton with Dr. Stilwell.

At U.P. Audiology, Cretens can get the settings of her implant adjusted and fine-tuned. It has several different settings for different noise situations, as well as upper and lower volume thresholds and an frequency equalizer. Collectively, these personalization settings are called ‘maps’.

“Patients will always need new maps as their brain adjusts to how they hear with the implant,” Dr. Stilwell said. “More mapping takes place in the first year after an implant surgery and then after that it is usually an annual appointment.”

Cretens said that if you see someone with an implant, don’t be afraid to politely ask if you can be heard.

“If you have to repeat something more than twice, say it another way,” she said.