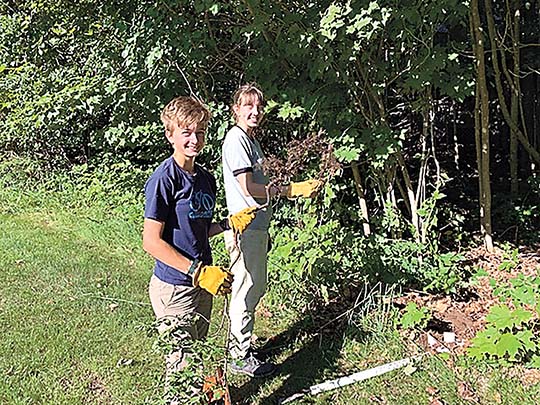 Two years ago, Houghton resident Hilary Sproule discovered that her backyard was infested with an invasive shrub known as “common buckthorn.” One shrub had grown to a 25-foot tree and there were many saplings and seedlings. She contacted the Keweenaw Invasive Species Management Area (KISMA), a state organization that facilitates cooperation and education among levels of government, local groups and landowners in the prevention and management of invasive species.

KISMA assists with the control and disposal of invasive plants, as well as monitoring, and recommending alternative native species that will benefit a green space.

Dr. Sigrid Resh, KISMA Coordinator and Michigan Tech Research Assistant Professor in Forest Ecology, visited and confirmed the presence of common buckthorn in Sproule’s backyard and expressed amazement at the size of the trees. She also provided information on how to remove the shrubs and seedlings.

Common buckthorn can be identified by its green simple, egg-shaped leaf with finely serrated margins. The leaves are opposite to sub-opposite and have three to five curved veins on each leaf. The twigs have a thorn at its tip hence its name buckthorn. In the fall, the female plant has black berries and these berries contain seeds that are spread by birds and animals. The bark is brown-grey and removing the bark will reveal an orange interior. Common buckthorn was originally introduced in the Midwest in the late 1800’s as an ornamental shrub but has been declared as an invasive shrub because of its negative impacts. Buckthorn changes the nitrogen availability in the soil, grows in all types of environments and it quickly takes over an area destroying the habitat for native plant species. Birds, and mammals eat the abundant fruit and spread the seeds.

As Sproule began the process of removing and managing buckthorn in her backyard, she noticed that there was a lot of buckthorn in the neighborhood. She learned that KISMA has been battling to contain buckthorn on the Michigan Tech Trails and it is present in several areas of Houghton and the Copper Country. 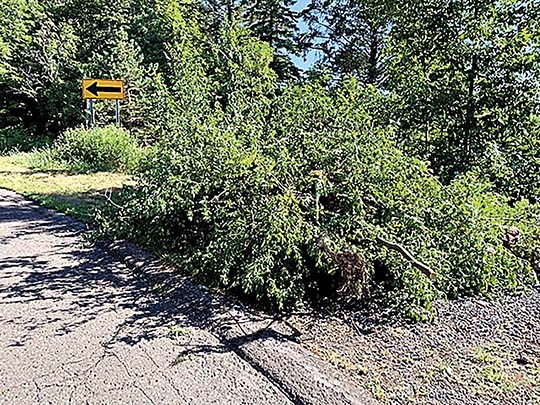 Provided photo One of the many piles of buckthorn brush waiting for city pick up.

Last fall, Sproule enrolled in the Master Gardner program, offered by Michigan State University Extension, to learn more about gardening. It is a 14-week course taught by MSU Extension staff members, MSU specialists, and other experts, and to be certified as a master gardner, students must complete a local volunteer project. Among the topics covered in the program was environmental stewardship so Sproule contacted Dr. Resh and they prepared a proposal to fight buckthorn. The idea of a neighborhood approach with a local advocate has been used in other communities in the mid-west.

The objectives of the project are to increase neighborhood awareness of common buckthorn, assist in accurately identification, use KISMA resources to help remove and manage the buckthorn growing in homeowner’s yards, and suggest native plants as an alternative to the buckthorn. The research proposal for this pilot project was funded by the Michigan Invasive Species Grant Program.

The project has five parts or phases. Sproule visited homeowners in the neighborhood to introduce them to buckthorn and invite them to a community education event which was held at Houghton’s Carnegie Museum. In June, an outdoor demonstration by Dr. Resh, a KISMA weed crew, and Sproule gave neighbors the opportunity to identify common buckthorn, and see the various tools and techniques for removing and controlling buckthorn.

One of the takeaways that Sproule has learned from the project is that homeowners should research plants before they introduce them into their garden as the consequences of an invasive plant can reach far beyond their own garden. Also, if you find Buckthorn in your yard don’t just cut it down, get some advice on how to remove it properly. 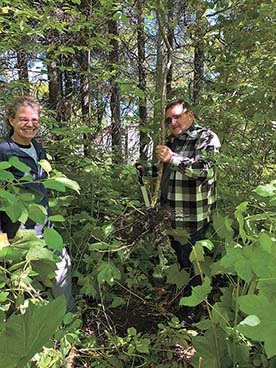 Provided photo Sigrid Resh and Joe Lentowich demonstrate the use of a root wrench to pull buckthorn during demostration day.

Many homeowners found that it was more difficult to remove a stump that had sprouted additional branches. She also hopes that homeowners will continue to monitor and remove buckthorn from their yards and that others in Houghton will begin to battle this invasive plant and recognize other plants that threaten our beautiful U.P. habitat.