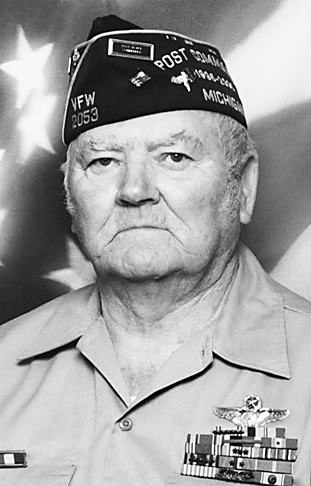 He was born January 30, 1926, to the late Glen E. and Genevieve (Servous) Archer and was raised in Muskegon.

Wilfred dropped out of Muskegon High School to enlist in the war effort and from there went on to begin his journey with the United States Military.

As a veteran, he served on the Great Lakes with the U.S. Coast Guard, the U.S. Navy, the U.S. Army Air Corp and retired as a Technical Sargent from the U.S. Air Force in 1964.

He served on amphibious landing craft in the pacific theater in WWII and flew Air-Sea Rescue missions during the Korean conflict.  He returned to the service, joining the Air Force Reserves in 1969 and flew C-124s into Vietnam.

Wilfred had also been employed as an aircraft mechanic, an aircraftmaintenance inspector and drove trucks hauling house trailers.

After retirement from the service, Bill resided in Harker Heights, Texas, Layton, Utah and Waco Texas. In 1978, he moved to White Cloud and since 2009, has made his home on Quincy Hill.

Besides his parents and his wife, Eloda; he was preceded in death by his sisters, Ruth, Betty, Geraldine and Dolores; and his step-son, Eddie (Jeanette) Amos.

To view Bill’s obituary or to send condolences to the family, please visit memorialchapel.net

The Memorial Chapel & Plowe Funeral Homes of Hancock are assisting the family with the arrangements.