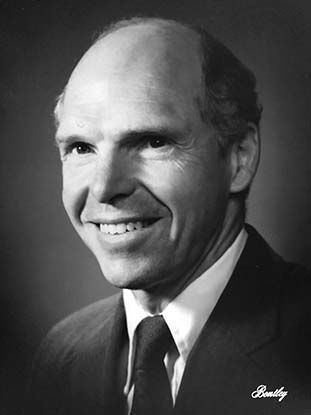 John and Gretchen were childhood friends and high school sweethearts. John graduated from Houghton High School in 1952, where he lettered in football and also played hockey. After graduating from St Thomas College in St. Paul, he served in the U.S. Navy, then attended the University of Michigan Law School. He spent a year clerking for the Oregon Supreme Court, and became a partner at the Oppenheimer Law Firm in St. Paul for 35 years.

A lifelong Catholic, John’s deep spiritual beliefs shaped and guided all aspects of his life. He generously spent many hours volunteering his time and talents for his church, pro-life organizations, and the local community.

John and his three brothers created the still popular game, Guts Frisbee, and hosted the first Frisbee tournament in Eagle Harbor in 1958.

John lived the motto “work hard, play hard.” An avid outdoorsman, he enjoyed hiking, biking, camping and canoeing. He biked and played softball and ice hockey, into his 80s.

John’s favorite and most important roles were husband, father, and grandpa. With the onset of dementia, he started to lose his mental acuity, but never lost his sweet and generous nature or his sense of humor. Even when he wasn’t sure who you were, he would greet you with a smile and a handshake!

Special thanks to Ehsan Rafian, Paymon Rafian, and Henry Andrastek for their loving care of Grandpa in his final years.

A Mass of Christian Burial was held Friday, October 18 at Nativity of Our Lord Church, St Paul, celebrated by his son, Rev. Fr. Daniel Healy. Interment was at Resurrection Cemetery, Mendota Heights, Minnesota. Condolences may be sent to the family at 2087 St. Clair Ave., St. Paul, MN, 55105.