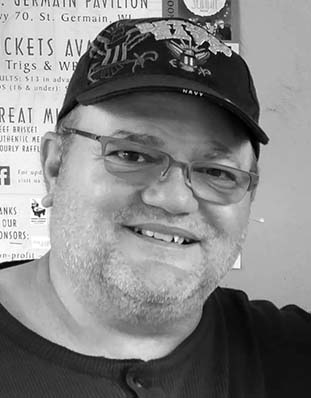 He was born on October 5, 1962, in Harrisonburg, Virginia, son of the late Jerry and Katherine (Morrow) Runion Sr. Jerry graduated from St. Petersburg High School in Florida and entered the United States Navy on January 21, 1981. He was honorably discharged after 20 years of service on September 30, 2001. While serving in the Navy he received many honors, including the Asia Service Medal, Armed Forces Service Medal, Sea Service Deployment Ribbon, Overseas Service Ribbon, NATO Medal, Kuwait Liberation Medal, Air Force Achievement Medal and the Kosovo Campaign Medal Letter of Recommendation. Jerry collected many experiences while stationed in Sicily, Italy for three years during his time in the Navy. Stories of his time on aircraft carriers, as well as other naval antics, were shared with friends and family.

Jerry enjoyed dancing, movies, trailer camping, the Green Bay Packers, striking up conversations with people he did not know, especially fellow veterans, and the time spent with his family and many friends.

Despite serious medical problems of the past years, Jerry kept his smile and his love and support of Cari and his son, Jerry. After relocating from Florida in 2007 to be with the love of his life, he adopted the Upper Peninsula as his new home and never looked back. Hugs from Jerry were frequent, enthusiastic, and mandatory.

In accordance with Jerry’s wishes, a private celebration of life will be held.

You may leave a condolence or tribute for Jerry’s family online at www.JacobsFuneralHomes.com.

The family has chosen the Jacobs Funeral Home and Cremation Services, Iron Mountain, Michigan, to honor Jerry’s legacy of life.