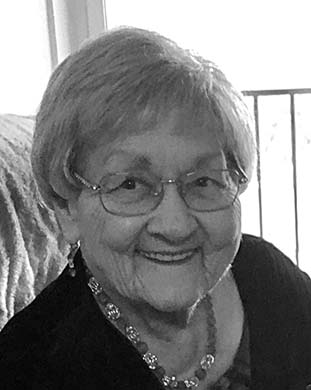 LAKE LINDEN — JoAnne Copley, 82, was called home Monday, February 24, 2020, following a two-year challenge of lung cancer, which she faced with dignity, grace, a sense of humor, and style. Recently of Houghton, she was a long-time resident of Lake Linden. She also lived in Monroe, Michigan for many years.

JoAnne was born in Lake Linden on May 12, 1937, the daughter of Nicholas and Beatrice (Briere) Gerard. She was a graduate of Lake Linden-Hubbell High School in 1955.

JoAnne and music were synonymous. She was always singing or playing the piano, keyboard, guitar, or other stringed instruments, and she loved to dance. As a teen, she was part of a group who sang on the radio.

JoAnne was a loving mom and homemaker. Throughout the years she worked part-time at the bank, Vertins, and K-Mart. She was an accomplished seamstress, including making a wedding dress and the dresses for the wedding party. She was a cake decorator and crafter.

JoAnne was a “social butterfly”, active at Heritage Manor and the Eagles in South Range. She enjoyed spending time with her husband, family, and friends, with an occasional trip to the local casino.

She was preceded in death by her parents and three brothers, Alfred “Don” (Joan) Gerard, Joseph Clyde (June) Gerard, and Eugene “Bud” (Twyla) Gerard. She was married to Richard “Dick” LaVergne then Larry Poirier, who both preceded her in death.

Visitation for family and friends will be Saturday, February 29, 2020, from 10:00 a.m. until 10:45 a.m. at the Pearce Funeral Home in Lake Linden. The Mass of Christian Burial will be celebrated at 11:00 a.m. on Saturday, February 29, 2020, at Saint Joseph Catholic Church in Lake Linden with Fr. John E. Martignon and Fr. Joseph Boakye Yiadom to concelebrate. Lunch will follow at St. Joseph Catholic Church.

In lieu of flowers, you may donate to Omega House, Houghton, MI (non-profit) or American Cancer Society. Interment will be at Mt. Calvary Cemetery, Lake Linden, Michigan.