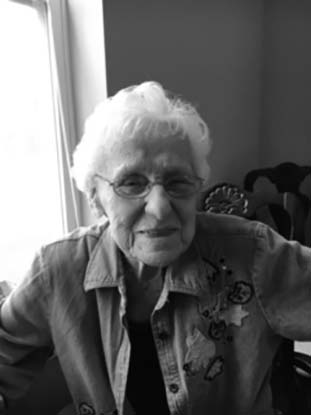 Gretchen (Stimac) Wade passed away on March 25, 2020, after residing in assisted care for 6 years. Gretchen was born Aug. 22, 1927 in Copper City to Paul and Ann (Spreitzer) Stimac. She grew up in Mohawk and was a 1945 graduate of Calumet High School. Upon graduation she and two classmates moved to Washington D.C. and began working for the U.S. Navy Department. After a year and a half she returned to the Copper Country and worked at several local jobs including the Phillipsville Gas Station which was run by her father for a brief period.

In 1949 she relocated to the Detroit area where she held several secretarial jobs including for L.A. Young Spring & Wire, Extruded Hinge Corp., and Ford Motor Co. In the early 1990s she retired from Ford after a 30 year working career. After retirement she spent summers at the family place at Five Mile Point.

In 1953 she married Donald D. Wade in Dearborn. Don was a tool & die maker for Ford and also a journeyman carpenter. They divorced in 1958.

Gretchen is survived by brother Jim (Bobbi) Stimac of Dearborn.

She was preceded in death by her parents, a brother Paul, and two sons, Donald and Michael Wade.

According to her wishes her remains will be cremated and interred later this summer at Calvary Cemetery in Ahmeek.