There is girls basketball talent in the area 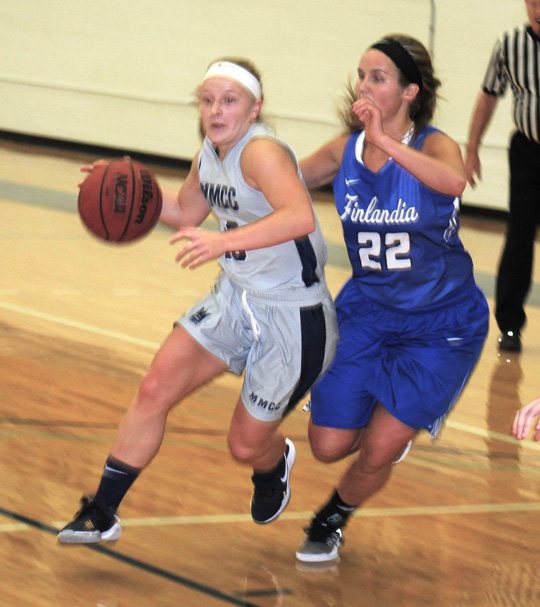 If he had any doubts, last Friday night’s Mid Michigan Community College and Finlandia meeting was good proof.

Unfortunately for the Lions, two of those players, Loukus and Sebbas, played for MMCC.

The two local products literally had their own rooting sections at Paavo Nurmi Gymnasium and were greeted with loud cheers whenever they did something positive in the game.

“It’s something we’re going to strive for here,” Motherwell said afterward. “Our recruiting grounds will be centered in the area and the U.P. for the most part,” he said. “There’s a talent pool right here.”

MMCC knows all about the talent locally. The Lakers recruited Calumet’s Ellen Twardzik three years ago, added Loukus of Calumet two years ago and signed Sebbas of Hancock this past year.

“We’ve had good success in the U.P.,” said Lakers skipper Matt Rodenbo. “Players up here are well-coached for the most part; they come in fundamentally sound.”

MMCC posted a 25-4 record and made it to the National Junior College Tournament last season.

Finlandia has also done well with local players in the past. They won an NJCA title in 2004, led by players like Beth Koski of Baraga and Brooke Sirard of L’Anse.

What the Lions have sorely lacked for a long time is a tall pivot player like the 6-foot-2 Sirard, who averaged double figures in points, rebounds and blocked shots one season while in high school.

Other local hoopsters are doing well. Carsen Osterman (Baraga) is at UW-Stout, Lori Wardzyski (Ontonagon) and Bailey Froberg (L’Anse) play at Gogebic and Justice Kinnunen (Baraga) is at Bay College.

And let’s not forget that Houghton standouts Elisha Jurmu and Sloane Zenner are on the roster at highly-ranked Michigan Tech.

Since MMCC, Gogebic CC and Bay College are two-year colleges, those players could decide to transfer, perhaps to Finlandia.

“We would certainly welcome them,” Motherwell said.

The kind of political posturing we’re seeing in this country when it comes to sports is uneven — and ...