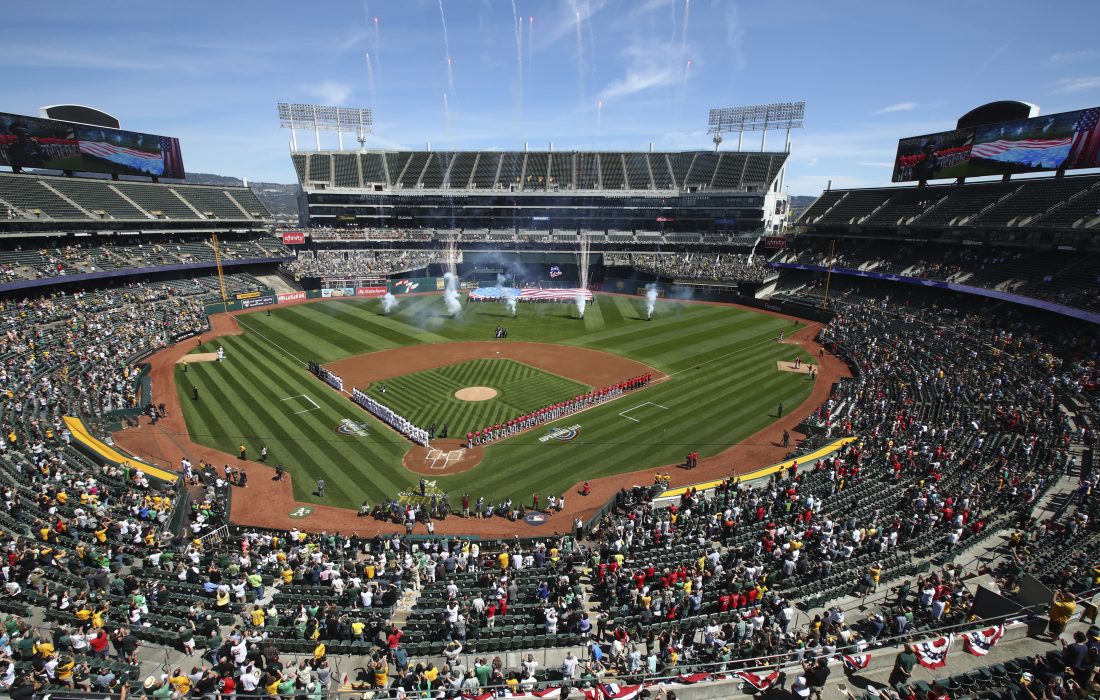 The Los Angeles Angels and the Oakland Athletics stand for the national anthem at Oakland Coliseum prior to an opening day baseball game on Thursday, March 29, 2018 in Oakland, Calif. (AP Photo/Ben Margot)

OAKLAND, Calif. (AP) — The head of the agency that oversees the Oakland Coliseum says the A’s have informed him they had “no ability to pay” the annual $1.2 million rent on the facility.

“They said because they haven’t used it, they were not able to generate revenue and they have no ability to pay,” Henry Gardner, the interim executive director of the Coliseum authority, said in a story published by the Bay Area News Group.

“We recognize that we’ve all been upended in a number of ways,” Gardner said. “Maybe there are some things we are willing to negotiate and waive, but we can’t just say no rent.”

The A’s have made the payment annually for use of the city- and county-owned baseball stadium and could face penalties for failure to pay.

The A’s released a statement Wednesday noting the authority hadn’t been able to make the Coliseum available to the team because of the local shelter-in-place directive as well as state and local bans on public gatherings of more than 1,000 people at city facilities.

“The A’s have fully supported the health directives and community efforts by the City of Oakland, Alameda County and the State,” the statement said. “The A’s sent notice to the JPA (authority) in March stating the Club is in support of these public health efforts and would defer annual rent payment, given the building was not available for use, per provisions in the contract.”

“The A’s look forward to when the City and County feel it is safe to lift current directives, and the A’s are granted access to the facility to play baseball,” the statement said.

The baseball season has been delayed because of the pandemic and it remains unclear when it may begin, though baseball has been moving closer to approving a start date.