Belmont set for June 20 without fans, leads off Triple Crown 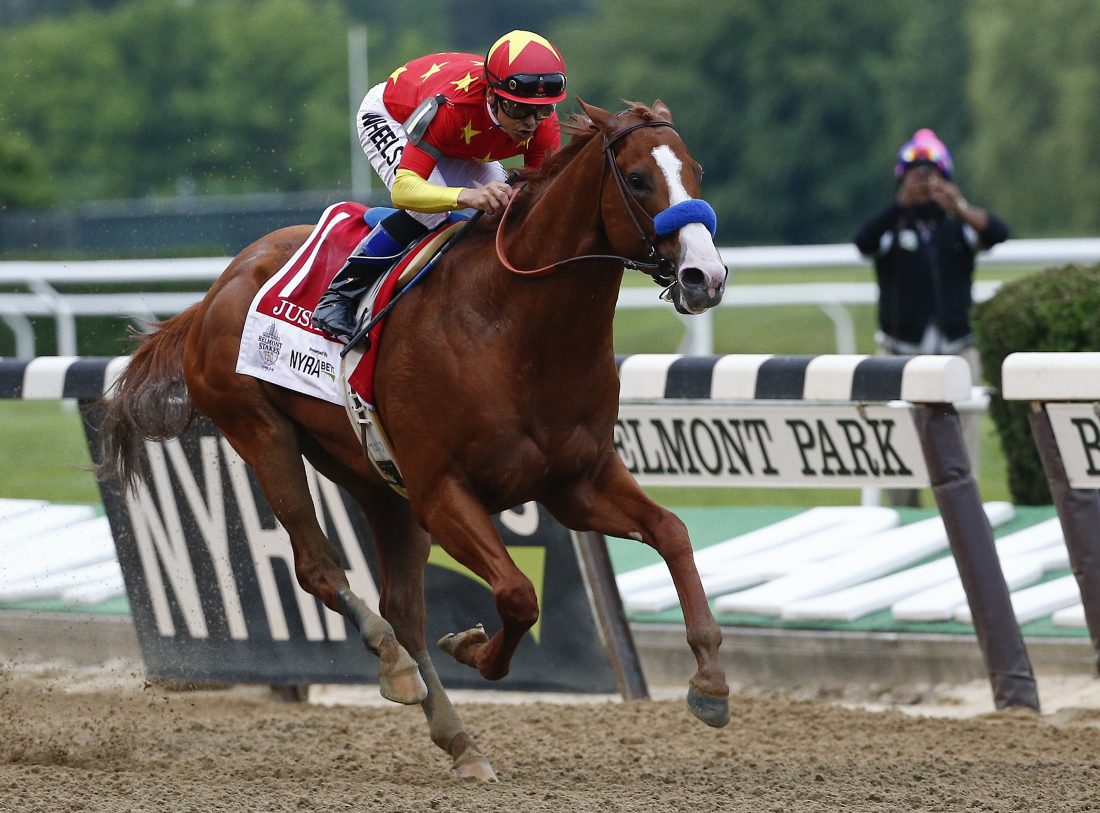 FILE - In this June 9, 2018, file photo, Justify, jockey Mike Smith up, crosses the finish line to win the 150th running of the Belmont Stakes horse race and the Triple Crown at Belmont Park in Elmont, N.Y. The Belmont Stakes will be run June 20, 2020, without fans and serve as the opening leg of horse racing's Triple Crown for the first time in the sport's history. The New York Racing Association on Tuesday, May 19, 2020, unveiled the rescheduled date for the Belmont, which will also be contested at a shorter distance than usual. This is the first time the Belmont will lead off the Triple Crown ahead of the Kentucky Derby and Preakness.(AP Photo/Peter Morgan, File)

Horse racing’s Triple Crown will look different this year from start to finish.

The Belmont Stakes will be run before the Kentucky Derby and Preakness for the first time and take place at a shorter distance. It will lead off the Triple Crown on June 20 in New York with no fans in attendance and at a distance of 1 1/8 miles instead of the 1 1/2-mile “test of the champion” that has been the race’s trademark for nearly a century.

“The way it fits in the calendar, it’s a completely different race than the traditional Belmont would be,” New York Racing Association president and CEO Dave O’Rourke said Tuesday. “I think we’re going to have a big field. I think it’ll be a really competitive field. I think the dynamics of the race are different.”

The three Triple Crown races will be run out of their traditional order for the first time since 1931. The Kentucky Derby was moved from May 2 to Sept. 5 and the Preakness from May 16 to Oct. 3 amid the coronavirus pandemic that has upended the sports calendar.

“I’m just happy we get to run,” two-time Triple Crown-winning trainer Bob Baffert said. “I’m just fortunate that they didn’t cancel any of them. A couple months ago, it didn’t look good.”

An out-of-order Triple Crown presents another set of challenges and would be a different kind of accomplishment than the one competed by the 13 past champions. The Kentucky Derby, Preakness and Belmont are usually run during a five-week span in the spring, and 3-year-olds are more mature by the summer and fall.

“It’s going to help some, it’s going to hurt others,” trainer Mark Casse said. “You’re going to see a lot stronger, probably a bigger, stronger horse from May.”

The Belmont is only being run two weeks after it was scheduled, but the shorter distance changes the complexion of the race and the Triple Crown. It has been run at 1 1/2 miles each year dating to 1926 and last ran at 1 1/8 miles in 1894.

It’s not the same going before the Kentucky Derby.

“The Belmont, running after that, the ‘test of champions’ is: ‘How tough is your horse? How can he handle it?'” said Baffert, who trained 2015 Triple Crown winner American Pharoah and 2018 winner Justify. “Now, a mile and a half, they can handle it easier the first time. It wouldn’t be as difficult as it would be after running those other two races.

Barclay Tagg would have been fine with running top contender Tiz the Law at 1 1/2 miles, and Baffert plans for elite 3-year-olds Nadal and Charlatan to go to the Belmont.

NYRA officials said in a release that the distance adjustment was made “to properly account for the schedule adjustments to the Triple Crown series and overall calendar for 3-year-olds in training.” O’Rourke said there wasn’t much debate about shortening the race, and all comers are welcome.

The Belmont was originally scheduled for June 6. But racing in New York was halted in late March after a backstretch worker tested positive for COVID-19, and Gov. Andrew Cuomo didn’t give the green light to resume until Saturday.

O’Rourke said NYRA had been in touch with the Stronach Group that owns Pimlico Race Course since the Kentucky Derby was rescheduled so they could coordinate the timing of the Preakness and Belmont. With little desire for squeezing in the Belmont in October before the Breeders’ Cup Nov. 6-7, the focus was on June or July while awaiting government approval.

“We didn’t have dates for a while. Every day seemed like a week,” O’Rourke said. “As long as we were able to start at Belmont the first week of June, we thought we could hold to this June 20 date with a different race in a sense of distance and whatnot.”

Live racing is gradually ramping up operations across North America because tracks feel they can operate safely and still make money without fans on site because of online betting and TV revenue. More than $90 million was wagered off track last year on Belmont day, and NYRA gets a cut of that money along with revenue from NBC.

Racing will return to Belmont Park in Elmont, New York, on June 3 and go through July 12. The Belmont will be the highlight of that meet, even with the purse reduced from $1.5 million to $1 million as a result of the pandemic-related closures of racetracks and casinos in New York.

The race will also offer Kentucky Derby qualifying points instead of being the culmination of the Triple Crown that has been won by just 13 horses. Doing so will be a different kind of challenge this year, and Baffert hopes to build up his horses to still take a Run for the Roses in September with the Belmont in the leadoff spot.

“I think they’re going to be more competitive with that spaced-out time,” Baffert said. “At the end of the day, the end game is the Kentucky Derby. That Sept. 5 date is what we’re all shooting for.”