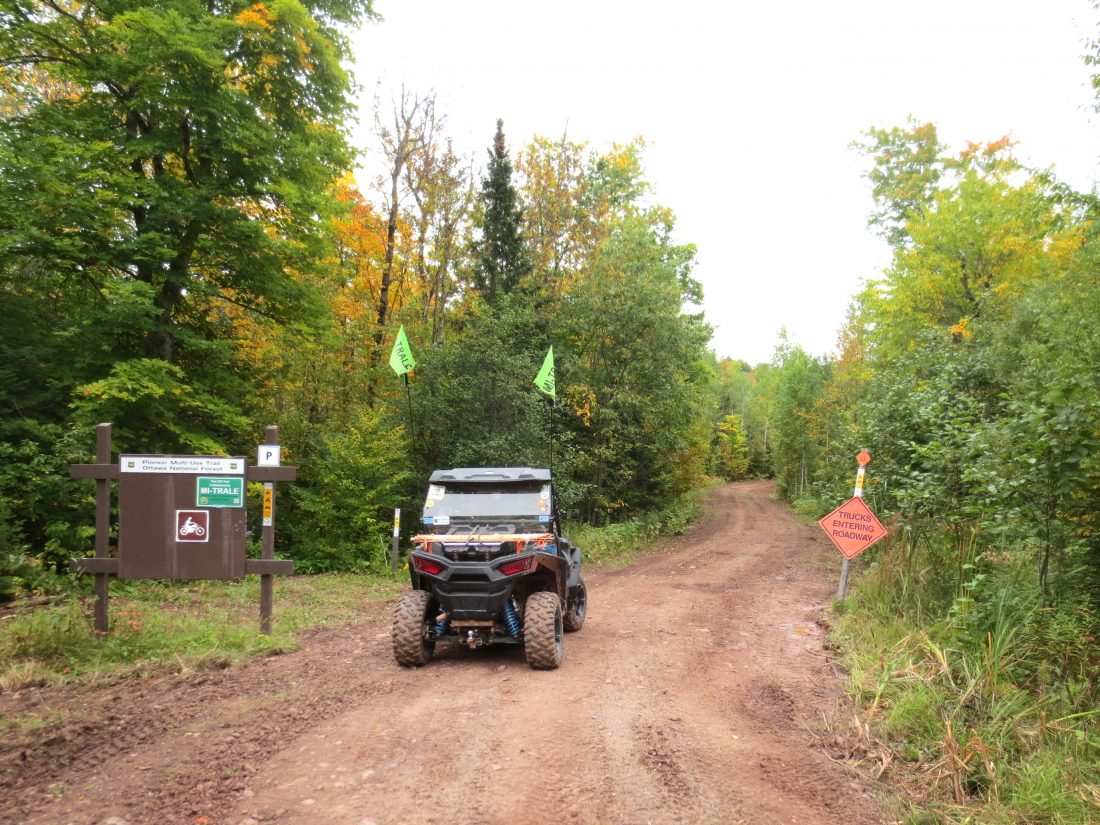 A multi-use trail from Rockland to Bergland is shown in Ontonagon County. The trail was originally called ‘The Pioneer Trail,’ which was originally built by the Michigan National Guard 107th Engineering Unit of Ishpeming. (Courtesy Photo/Ottawa National Forest)

In light of the recent use of National Guard units all over the U.S. being used to quell protests and rioting in cities, this past week the Michigan National Guard was training and working in the Porcupine Mountains Wilderness State Park.

They were not doing that to calm down those hiking for the day. Nor were they called on to keep the black bears from entering the cabins and facilities inside the state park.

After two years of planning, the Ishpeming-based 107th Engineering Battalion was at the Porkies to maintain the park.

Unlike National Guard units in cities where some were not happy to see the Guard, those in Ontonagon County greeted the Guard with open arms. The Ontonagon Area School Board opened up their locker-room and gym to the Guard. Residents thanked the Guard for being in the area.

While many may think this was a ‘first’ in Ontonagon County, those in off-road motorsports recall the historic work the 107th Battalion did over 25 years ago.

With the leadership, direction, and view to the future of Jim and Kathy Firkus of TRALE-UP, the National Guard, teamed up with the Army Reserve Unit of Hurley, Wisconsin, and the Michigan Department of Natural Resources to build one of the best Off Road Vehicle Trails in the entire nation.

The trail, originally called the Pioneer Trail, would go from Bergland to Rockland. Now called the ‘P’ Trail would go through the heart of the Ottawa National Forest. The trail would include over 100 culverts, which would require major engineering and environmental ‘studies.’

In addition to having over 100 culverts, this trail would go through what the US Forest Service calls 6.1 Semi-Primitive land use. Ask anyone in the Forest Products Industry what they have to go through to simply harvest wood on USFS managed property.

The engineering, equipment, and labor to undertake a project as intensive as what the P Trail was for the National Guard, truly was ‘historic.’

While the project started in the early 1990s, it was after TRALE-UP dissolved, and Mi-TRALE was formed in 2001, that the Michigan DNR and the Ottawa National Forest ‘officially’ open the ‘P’ Trail. It was the vision TRALE-UP and those that formed Mi-TRALE, that work continued on to make this trail popular.

Years later, Mi-TRALE, along with the DNR and the Ottawa National Forest, improvements were made to make it trail a trail ORV riders and snowmobilers could enjoy.

While some current individuals like to lay claim and credit for this trail, those that truly know the history of this trail gives credit to those that did the work, and had the vision to make the ‘Pioneer’ P-Trail a reality. That work and vision goes to those in the 107th Engineering Battalion, the Army Reserve, the Michigan DNR, the Ottawa National Forest, and especially Jim and Kathy Firkus of TRALE-UP.

Whether it is from the north end of Lake Gogebic, or going from the Copper Country on the BN and C Trails, get on your ATV or SXS and ride the ‘P’ Trail. Make sure you take your camera. Somewhere along the trail, take a moment to imagine how the trail you are on wasn’t even a ‘hiking’ trail.

In the Copper Country, our National Guard isn’t used to squelch an uprising, the training they are used for is to enhance and improve outdoor recreational experience.