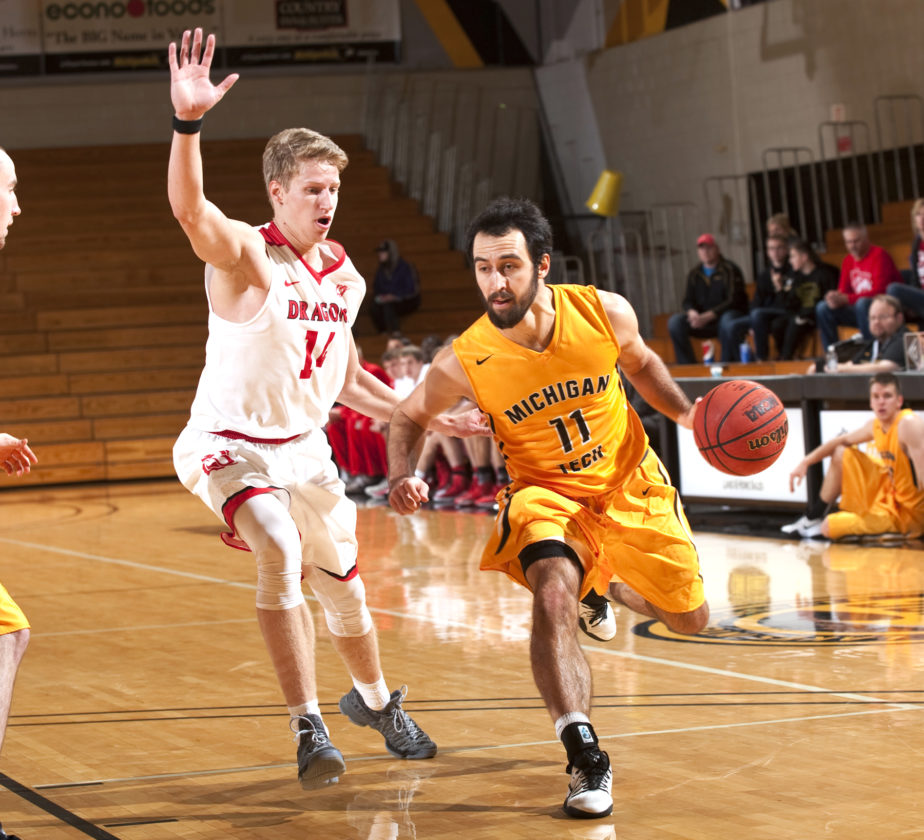 HOUGHTON — There are definite disadvantages to not having your leading scorer in the lineup.

“Obviously, we’d like to have had Kyle (Monroe ) in there,” Luke noted after a hard-fought 90-82 defeat at the Student Development Complex Gym. “On the other hand, the best thing I can think about having an injury to one of your better players is that your other players step up and get better.

“If all our players continue to get better …. I think when we’re all together we’re going to be pretty tough.”

The loss to the Dragons dropped the Huskies to 1-3 on the season. Moorhead, which blasted Northern Michigan University the night before, moved to 2-1.

Picking up the slack for Tech were freshman guard Tommy Lucca and senior guard Jordan Chartier.

Lucca netted a game-best 27 points and handed out five assists, while Chartier was good for 23 points while grabbing five rebounds.

“Tommy Lucca and Jordan Chartier were outstanding,” Luke said. “But that team (Moorhead) put on an awesome offensive display. They were in control, they were precise with their passes and they rebounded it well. They’re very well-coached and very disciplined.”

To their credit, the Huskies managed to stay close throughout. It wasn’t until Tanner Kretchman nailed a 3-pointer with 1:42 left for an 82-74 reading that the Minnesota team could relax at all.

The two teams ended the first half in a 43-43 stalemate, a late trey by Bryan Heath of MTU resulting in that score.

The lead went back and forth much of the second half before the Dragons seized a 64-57 advantage with 12:52 remaining.

But five straight points by Dillon Gordon and a bucket by Lucca knotted it at 64-all.

A triple by smooth-shooting left-hander Aaron Lien of the Dragons broke the tie and MSM would never trail again.

Lien was a constant thorn in the side of the Huskies, notching 21 points.

While Lucca and Chartier (who was 6 of 10 on treys) paced MTU, Heath pitched in 17 more points and Gordon, the former Ewen-Trout Creek standout, netted 13.