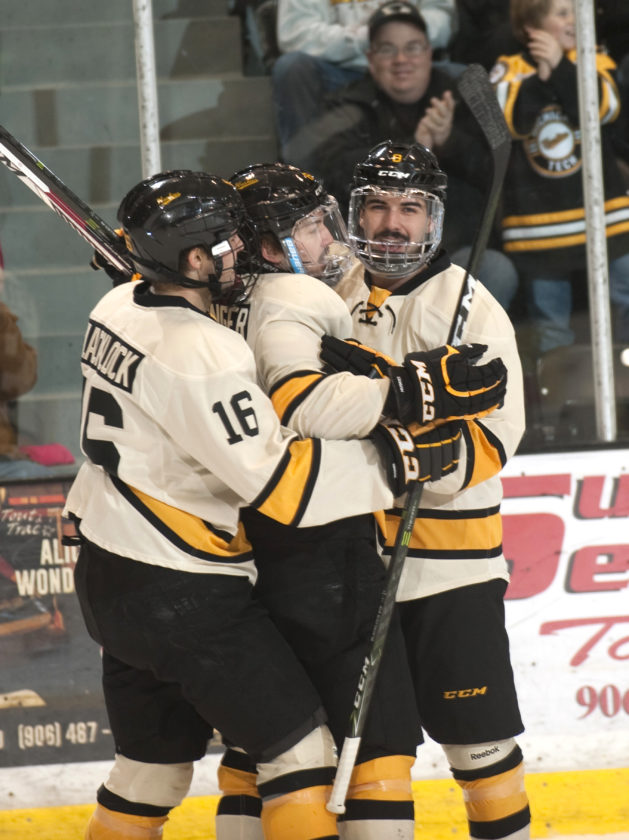 HOUGHTON — Giving up a goal in a hockey game during the final seconds of a period can often give the scoring team a huge boost, all while creating a tremendous letdown for the team who surrendered the goal.

Saturday night, the visiting No. 13 Bemidji State Beavers evened the game late in the second period against the Michigan Tech Huskies at the MacInnes Student Ice Arena.

Rather than allow that goal to grant the Beavers momentum, the Huskies regrouped in their locker room during the second intermission and came out hard in the third period.

Outshooting the Beavers 13-3 in that final frame, it became only a matter of time before the Huskies broke through with the goal they would need to win. That game-winning tally came with just 3 minutes, 19 seconds left when assistant captain Michael Neville received a pass from winger Reid Sturos. The senior wasted no time blasting a slapshot just under the crossbar and past Beavers goaltender Michael Bitzer, helping the Huskies to a 2-1 win.

For Neville, playing with Sturos and sophomore Jake Jackson has pushed him to improve his offensive output. He scored two goals on the weekend.

“I attribute it to my line,” said Neville. “Playing with Reid and [Jackson] has really helped me out confidence-wise. Also, I think we have some really good chemistry going right now.”

Tech (10-7-3 overall, 9-3-2-1 WCHA) head coach Mel Pearson was proud of his veteran forward, who had been more offensive in juniors, but has struggled to score at the college level.

“Sometimes you lose your confidence or you think you are only one-dimensional,” said Pearson. “I’ve asked him to step up his game offensively and it is good to see that because he can finish.”

For the Beavers, the game-tying goal from captain Charlie O’Connor with just 8.7 seconds left in the middle frame on a rebound that sat behind Huskies goaltender Angus Redmond, was the culmination of a solid second half of the second period after struggling through the first.

“You want to build on that goal,” said Beavers coach Tom Serratore. “Those goals could be a backbreaker in the last minute of a period. You want to turn the tide.”

The Beavers (12-5-1 overall, 12-1-1-1 WCHA) had trouble regaining the composure and effort they played Friday’s game with, and that is what led to their first loss in WCHA play.

For the Huskies, their fourth line of senior Chris Leibinger, sophomore Mason Blacklock and senior Alex Gillies proved to be a very difficult line for the Beavers to figure out. While Gillies had recently returned from injury during the trip to Alaska, Blacklock made his return to the lineup Saturday. Both figured into Leibinger’s sixth goal of the season to open the scoring just 5:56 in.

Blacklock got the puck below the Beavers’ goalline. He fed it back out front to winger Alex Gillies, who attempted a shot before getting the puck back and firing it across the crease to an uncovered Leibinger; Leibinger lifted the puck over a sprawling Bitzer for the goal.

“I knew (Bitzer) takes away the bottom of the net,” said Leibinger. “You really have to get it up, so that is what I focused on doing.”

Playing an effective game no matter who skates alongside him and with six goals on the year, Leibinger find himself tied with winger Joel L’Esperance for the team-lead, something that has not gone unnoticed by Pearson.

“I can’t say enough about Chris Leibinger,” said Pearson. “He might lead our team in goals this year by the end of the season. He’s just doing a fantastic job.

“What I really like about it is that he is not concerned about who he is playing with, what position. He just wants to help Michigan Tech hockey have success.”

L’Esperance found himself in the midst of some controversy late in the opening period when he drove to the Beavers’ goal with the puck. On the way in, he was shoved from behind and ran into Bitzer. Without making much of an effort to get back up, L’Esperance reached out and knocked the loose puck home. The goal was waved off due to his presence in the crease keeping Bitzer from being to make a play on the loose puck.

Defending WCHA Defensive Player of the Week Angus Redmond made another bid to retain his crown in the late stages of the first period when he stopped a quick-developing breakaway by the Beavers’ Jay Dickman. In the second, Redmond came up with another key save on Gerry Fitzgerald, who took a drop pass from Brendan Harms and fired a shot from the slot. Fitzgerald got his own rebound, but again Redmond was there to make the save.

With little action in the final frame, Redmond had to keep his composure, which he proved he could handle when Kyle Bauman skated the puck in deep and found Leo Fitzgerald, whose shot Redmond stopped.

The Beavers pulled Bitzer with 1:27 left in regulation. Leibinger was rewarded by Pearson and his staff for his efforts by getting to play on a line with Neville and Sturos, and he responded by pinning the Beavers deep in their own for nearly a third of those remaining 87 seconds.