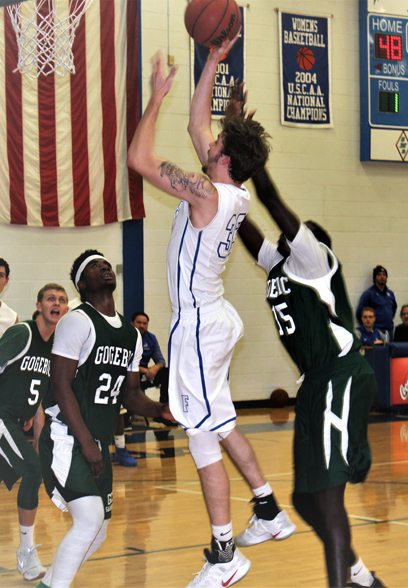 HANCOCK — Finlandia University men’s basketball coach Mike O’Donnell was looking for a couple of things in his team’s exhibition opener against Gogebic Community College on Tuesday.

One, he wanted to see how Brandon Robinette (Escanaba) would do after missing all of the last season with a knee injury. Two, he wanted to check on the progress of junior center Austin Carlson, the Lions tallest player at 6-foot-8.

“It was good to have Brandon (Robinette) back in the lineup,” O’Donnell said after an 80-61 win over GGC. “Obviously, we missed his scoring punch last season and his overall knowledge of the game. He played well tonight.”

Robinette, a 6-6 junior, had 10 points and six rebounds in his time on the floor.

“Austin Carlson worked very hard in the offseason. He worked in the weight room to get stronger,” O’Donnell noted. “He’s come a long way since last season, and I think he can really help us in the pivot.”

As for the game, the Lions started out ice-cold, scoring just three points in the first

nine minutes, leading to a 13-3 lead for the Samsons.

But the Blue and White found the mark and surged to a 34-31 lead late in the half before a late triple by Michael Hill tied it up at 34-all.

Finlandia scored the first 11 points of the second half and held off the Gogebic County team after that.

“I thought we had several players who came in played well,” O’Donnell said.