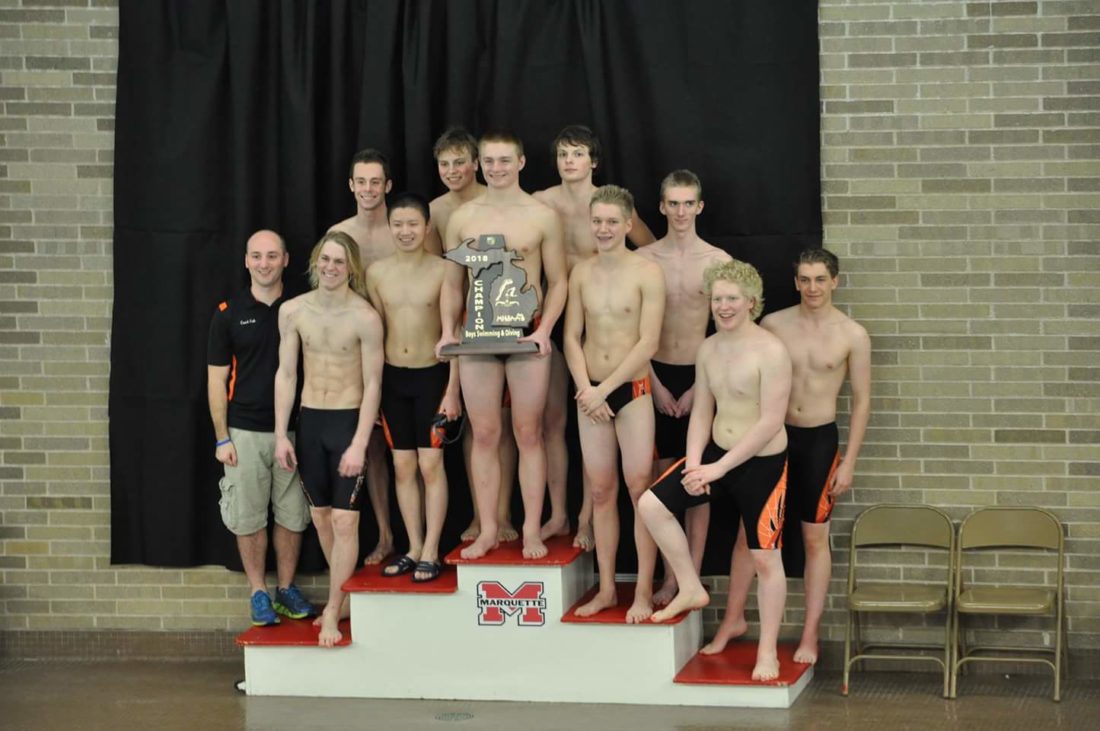 MARQUETTE — For the past four years, the Marquette boys swimming and diving team has had a stranglehold on the Upper Peninsula Finals.

And on Saturday, it appeared that the Redmen might pull off their fifth straight title.

Marquette led Houghton by just two points heading into the final event, the 400-yard freestyle relay, but couldn’t hang on in the end. The Gremlins, who had finished second to Marquette the past two years, won the event by almost six seconds, their only win of the meet, and took home the title with 242 points. Marquette finished second with 232, and Kingsford took third with 192.

“We were down two points and I told the boys just give it everything you’ve got and they came through,” Houghton coach Erik Johnson said. “This feels pretty darn good. These kids worked really hard and we only did it with nine guys.

“I’m really happy for our seniors to be able to send them out this way. It’s been a goal of theirs for a long time and they were able to get it done.”

Marquette head coach Nathan McFarren knew it would be difficult for his team to defend its crown for a fifth time and was proud of how his team performed considering how few swimmers came out this season.

“Quite honestly, if you told me at the beginning of the year that our boys would get second, I would’ve said you’re crazy,” he said. “We lost some amazing swimmers that I had for four solid years. The boys team gave it everything we had.

“We just didn’t have the depth when it came down to it. We won a lot. We swam hard. We worked hard and we had a great taper but it wasn’t in the cards this year.

“I’m very proud of them honestly. I told them there’s no reason to be licking their wounds right now. It was a pretty amazing performance for the size of a team that I had. This is probably the smallest boys team I’ve ever had.”

The Redmen finished first in the other two relays (200 free and 200 medley) and picked up two individual titles. Matt Brauer took the top spot in the 200 free, while Ryan Glover won the 100 backstroke.

Sault Ste. Marie had two individual champions with both swimmers winning two events. Leevi Olson won the 50 free and 100 free, while Andrew Innerebner took first in the 500 free and the 100 butterfly.

Kingsford’s Caleb Plumley had a strong day as well as he finished on top in the 100 breaststroke and the 200 individual medley.

The final individual champion was Westwood’s Joey Boburka, who won the diving competition on Friday.

On the girls side, Gladstone finished first (303) and was followed by Marquette (273) and Houghton (237) for the top three spots.

Houghton had a champion with Samantha Olson winning the 200 free (2:05.80), but Johnson thought his team still had a good day.

“I thought the girls did really well,” he said. “They had a lot of great swims and everybody for the most part dropped their times. That’s all you can really ask for.”