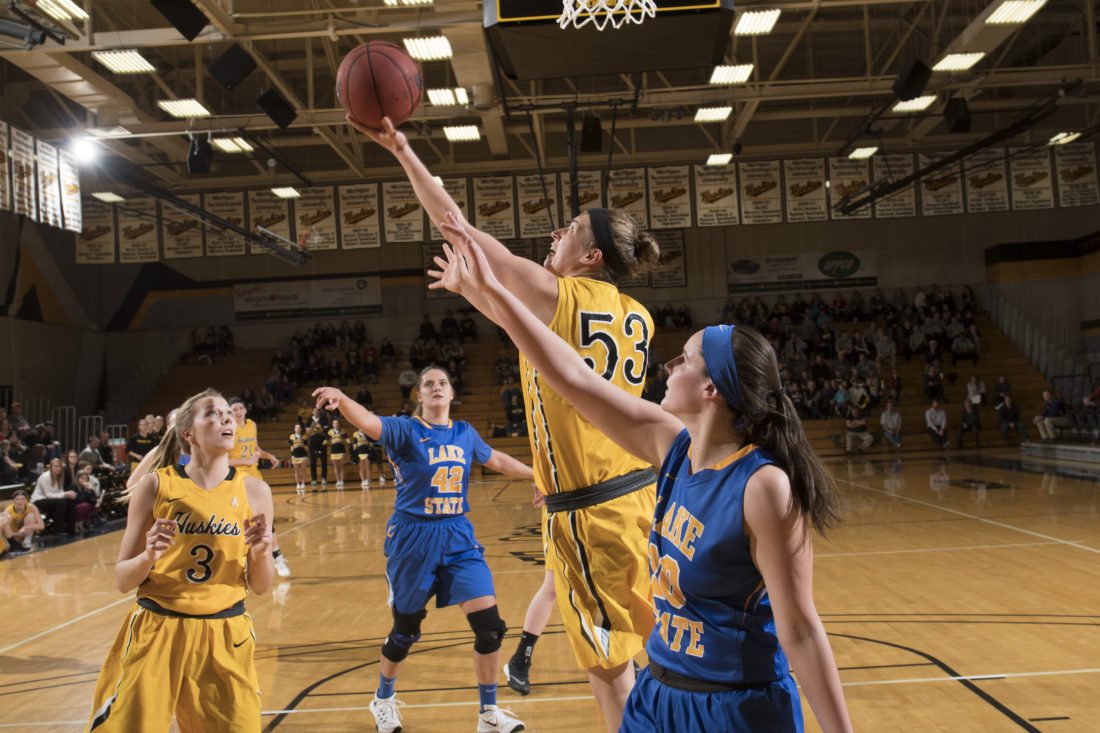 HOUGHTON — Listen to enough GLIAC coaches, and they all elaborate on how difficult it is to win in this league. So it came as no surprise to No. 17 Michigan Tech when a two-win Lake Superior State squad came into the Wood Gym and competed with the tenacity expected in contests between U.P. rivals.

Still, Tech was too good, too strong and too deep for an improved LSSU squad — just as the Huskies have been all season. Tech scored a 75-65 win Saturday to claim the GLIAC North division title. It’s Tech’s third division crown in four seasons.

“It feels awesome because that’s a goal (for us),” Tech coach Kim Cameron said. “It’s not easy, and you could see that today. I’m super, super proud.”

With the wealth of experience returning, including an all-senior starting lineup, the Huskies were selected as the GLIAC North favorites in the preseason coaches’ poll. Tech (22-3, 15-2) lived up to the hype, sweeping all five of its North foes, including perennial contender Grand Valley State and rival Northern Michigan.

“Being able to handle certain things, this team has done that,” Cameron said. “You lose a starting senior point guard (Lindsey Winter) for a period of time, we took some beatings with being on the road for 15 of 23 games and the (players) have just handled everything.

“It hasn’t been easy, and in the past we’ve dropped a game here or there that maybe we shouldn’t have. This year they’ve really put their heads down and gotten the job done.”

Tech’s biggest adversity on Saturday came when LSSU’s Abigail Ostman converted two free throws to cap a 9-2 run, giving the Lakers a 52-49 lead with 3:15 left in the game. But from there, LSSU shot just 3 of 18 from the field the rest of the way.

As Winter sat for Tech, LSSU was also without one of its guards in freshman Taylor Bryant.

“Losing Taylor as one of our guards in our rotation, we had to play more minutes and it showed in our legs late in the game with some of the shots we weren’t able to knock down,” LSSU coach Brandon Lokken said. “I still thought we moved the ball well and got some pretty good looks. It was just a little bit of fatigue.”

“We were trying to make it a point where we were moving when the ball was in the air. Getting out and pressuring the ball and moving a little bit quicker defensively.”

Trailing 52-49, Tech went on a 9-0 run, capped by a three-point play on a layup and free throw from sophomore Hannah Hobson.

Stoll paced Tech with 14 of the team’s 36 second-half points, converting on 4 of 5 shots and 6 of 8 attempts from the free-throw line. Her final free throw gave Tech a 68-61 advantage with 1:33 left in the game.

“I just had to be aggressive tonight,” Stoll said. “There were a lot of openings. Getting to the rim is something we’ve been working on more, so I thought it would be a good idea.”

For the second game in a row, LaFave sparked Tech’s offense when she entered the game. LaFave made her first five shots, including three 3s for 13 points. She also shot 5 for 5 overall (2 for 2 from 3) for 12 points in Thursday’s win against Ferris State.

“She was fantastic today,” Cameron said of LaFave. “She came in and her first offensive possession was a pass in for a wide-open layup. Then she fed her offense from there. I think that was really important. Her vision is getting better, and she’s obviously been very productive for us, and we need it. We need to be able to rest people, and she also did a great job defensively.”

LSSU started hot, making 14 of 25 shots, proving it can compete with the league’s elite as Tech led 39-38 at halftime.

“I think it shows everyone has bought in,” Lokken said. “They continue to work every day, and we’ve talked how we have to change the culture. It’s not showing up in the win-loss column, yet, but every day we’re battling and getting better. They’re excited with their positivity and with where we’re going.”