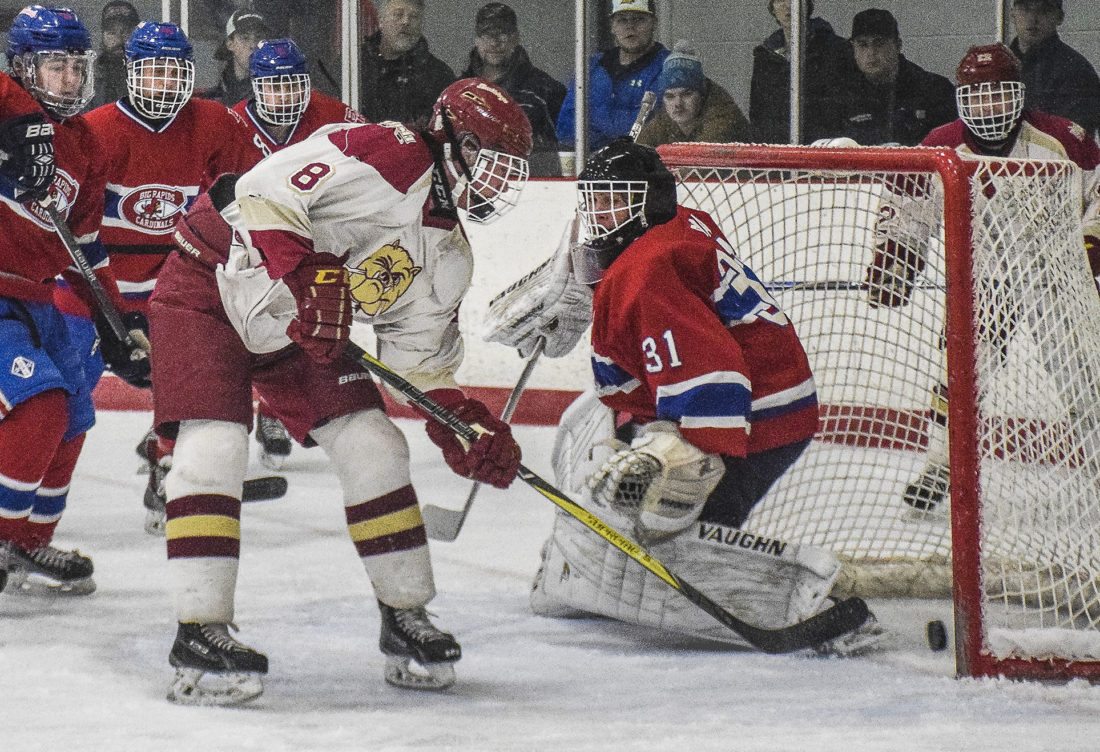 SAULT STE. MARIE — You could almost feel it in the air, that omnipresent force that can be a team’s best friend, or worst nightmare: momentum.

Neither team had controlled play, but the tension was mounting, and with each shift, each shot, each movement on the ice, it became clear that the next goal could be the goal — the one that took the momentum out of limbo and put it firmly on one team’s side.

Big Rapids needed it. Hancock needed it too, but only one team could have it.

Alex Nordstrom made sure it was his team.

With 37 seconds left in the second frame, the junior forward skated with determination and fired the puck past Fletcher Boda, giving the Bulldogs a one-goal lead and the momentum they needed to cruise to a 5-1 victory in the Division 3 quarterfinals Wednesday in Sault Ste. Marie.

“It was such a big goal, and right before that he got a breakaway, and he got stoned, he didn’t get it through,” Hancock coach Dan Rouleau said. “But when he got that one you could almost see the determination on his face that he was not going to be denied the second time.”

On the previous play, Nordstrom used his speed to shake off the Big Rapids defense. He attempted to shoot through Boda’s legs, but the Cardinals’ netminder came up with a big save.

But you can only contain Nordstrom for so long, and when he got another chance, he made sure it counted.

“You don’t want to get stopped twice on a breakaway,” he said. “He was deep in the net so I tried to go high-glove and it worked.”

Nordstrom’s goal opened a floodgate for Hancock, and in the third period the Bulldogs fired off three more goals to earn a spot in the semifinals against Detroit Country Day on Friday.

Teddy Randell, Bryce Randell and Colton Salani all scored in the period.

“That goal by Alex Nordstrom was kind of a backbreaker, that is a tough goal to give up at that point,” Big Rapids coach Tim Blashill said. “I thought he played great. That one kind of hurt us, and they are pretty talented, so in the third there when we gave them some chances, they are going to finish them.”

Hancock opened the game with a goal by Salani, who fielded a pass from Teddy Randell and caught Boda facing the opposite direction. With a near-open net, Salani tapped the puck in for a 1-0 lead.

But from there, the Bulldogs fell flat.

The plan coming into the game was to screen in front of Boda –a goalie with a 94 percent save percentage — in order to take his eyes away. But, it created too much traffic in front of the net, and pucks were bouncing off Bulldogs and Cardinals alike before even getting close to the net.

With Hancock not connecting, Big Rapids started to put together some chances of its own, and River Spedowski evened the score at 1 with 11:10 remaining in the second period. Spedowski snagged the puck behind Hancock’s goal, faked one way, and when Dawson Kero shifted, he snuck the puck into the right side of the net.

From there, things evened out, and as Big Rapids began to string together some quality shifts, the Bulldogs needed a big play.

Nordstrom’s goal got them back on track.

“They came in a little faster than we thought they would,” Salani said. “We might have come in a little overconfident, but in the third period we closed it out and made it a no contest.”

The third period served as a guidebook to what Hancock is capable of when the Bulldogs are executing in all facets of the game. Their passes were crisp, their defense was sharp, and they connected with pucks in front of the net.

“I think they have a great chance going forward,” Blashill said. “They have lots of talent, lots of speed, great goaltending, so I expect them to make a really good run at the state title.”